Tokyo Olympics: Why the stories of elite athletes make for such great childrens’ books Whether it’s Tom Brown, the principled captain of the cricket team in Tom Brown’s School Days, or Darrell Rivers playing lacrosse in Enid Blyton’s Malory Towers, or Harry Potter making the Quidditch team in his first year at Hogwarts, the sporting hero has long been a stalwart of children’s literature.

The most popular child protagonists often possess innate – or unexpected – athletic ability. They exhibit good sportsmanship, winning and losing with grace and good humour. They model determination and dedication.

It is no surprise then that children find real-life athletes mesmerising too. From skateboarder Sky Brown – Team GB’s youngest Olympian to date, aged 13 – to record-breaking swimmer Adam Peaty, players on the Olympic stage appear as superheroes, seemingly able to defy the laws of gravity or swim faster than Aquaman.

Their exploits chime with the way children seek to push physical boundaries, wanting to always climb higher, jump further, run faster and hold their breath underwater for longer. As the runaway success of Marcus Rashford’s book, You Are a Champion, demonstrates, books by and about real-life sporting heroes are as instructive as they are exhilarating.

Tapping into the celebrity author trend in children’s literature, numerous athletes have penned their own books. Research has looked at how those by female athletes – from softball champion Jennie Finch’s Throw Like a Girl to football player and Olympic gold medallist Alex Morgan’s Breakaway – seek to empower young girls.

While Rashford’s guide to dreaming big and being the best you can be is aimed at older children and young people, tomes for the youngest readers have garnered acclaim too. In Ready Steady Mo! and the Go, Mo, Go! series UK distance runner Mo Farah has written with popular children’s author Kes Gray, he has used rhyming verse and illustrations designed to appeal to beginners:

Run on the pavement, Run on the grass, Run in the playground, Perhaps not in class!

The emphatic repetition creates an almost onomatopoeic sense of Farah’s swift footsteps as he runs away from sea monsters, yetis and dinosaurs.

In his 2009 book, How to Train with a T. Rex and Win 8 Gold Medals, US Olympian Michael Phelps, meanwhile, presents the kind of facts small children are drawn to: swimming the length of nearly 11 Eiffel towers in a single Olympic Games; and eating enough broccoli to fill the back of a pick-up truck. Much has been written on the importance of non-fiction in children’s literature, in terms of satisfying curiosity and promoting analytical thought.

Lucy Semple’s When I Grow Up – Sports Heroes is a colourful illustrated book which follows sports stars from childhood to the Olympic podium. As well as showing that they were once children too, the book helps young readers appreciate that the 19.30 seconds it took Usain Bolt to win the 200m in Beijing 2008 was the culmination of decades of hard training and self-sacrifice.

And in one of her Ultimate Sports Heroes series, Melanie Hamm tells the story of how the heptathlete Katarina Johnson-Thompson became a world champion. Hamm does not sugar-coat the injuries and disappointments the Liverpudlian suffered early in her career but instead emphasises that it is exactly those moments of darkness and despair that have since propelled Johnson-Thompson to glory.

These are stories of discipline and resilience. Psychotherapists suggest that they can provide children with concrete examples of how to handle adversity. 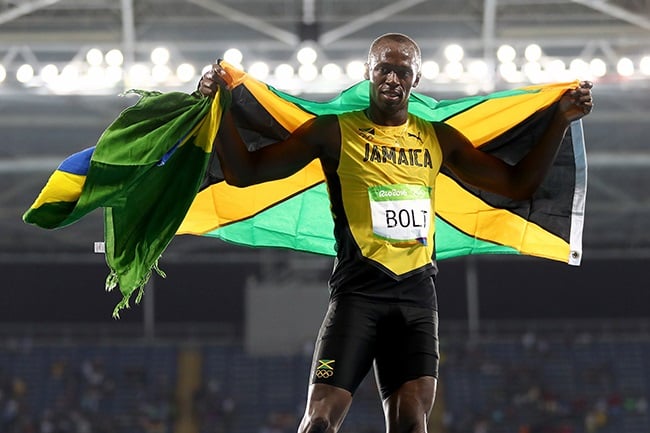 In Flying High, Michelle Meadows relates the inspirational journey of US gymnast Simone Biles through a regular ABCB rhyme scheme. As the most decorated gymnast of all times completes the Biles – one of the moves now named after her – at the Gymnastics World Championships, we see that:

Her signature move shows phenomenal flair: two breathtaking flips high up in the air. Simone is on a roll, watch her go, go go! She’s the best in the world three years in a row.

Research shows that rhyming texts help children to better remember the sequence of events in a narrative. Parents can take advantage of rhyme to make reading aloud more interactive by pausing before reading the rhyming word to allow young children to fill it in.

Correctly anticipating the missing rhyming word gives children a sense of accomplishment and makes them more likely to recall that word for use in the future. By reading for pleasure about the medal-winning performances of an Olympic gymnast, children are also becoming more agile and confident in their use of language.

Team GB synchronised swimmers Kate Shortman and Izzy Thorpe revealed last week that they have been bullied online for their "big shoulders, small boobs and small bums". This is sadly something that happens a lot, so it is clear that inspiring body positivity and a sense of sporting potential in young girls is crucial.

Children’s books including Meadows’s book about Biles, as well as Jeanette Winters’s celebration of Venus and Serena Williams in Sisters, aim to do just that.

Jaded adults might question whether the games should go on. But the stories Olympians have to tell still have the power to enthral. And the very values the Olympics purport to embody – excellence, friendship and respect – remain closely aligned with those we hope our children will glean from the books they read.