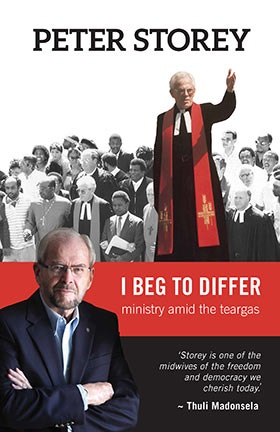 I Beg to Differ written by Peter Storey, published by Tafelberg Publishers.

When Peter Storey was appointed the chaplain to Robben Island prison in 1962 he was still only a young minister serving the peaceful upper class and white suburbs of Camps Bay and Milnerton in Cape Town.

The monthly trip across the water to this barren island and the stark contrast to the reality white South Africans lived in made a profound impact on him and forever influenced his ministry, often amid teargas and rubber bullets.

"I spent many hours with Robert [Sobukwe] because he was in isolation and I could have an hour or so with him each time I went. I was discovering this man was a giant of incredible moral and spiritual depth and with an acute understanding and insight into the country we lived in. And here was this amazing human being locked up because he disagreed with the government of the time," he tells News24 in an interview this week.

"Once when I left, I expressed to him my guilt at being free to leave as I pleased. He looked across the water from his hut facing Cape Town and said: 'Peter, I'm not the prisoner, they are.' I sensed that that was where greatness would come from."

Storey would later become bishop of the Methodist Church and a leader in the South African Council of Churches (SACC). Through his work for the church, he bore witness to some of the biggest moments in South Africa's history, comforting those forcibly removed from their homes in District Six, giving guidance to students during the uprisings in the 70s and 80s ,and acting as mediator as the drama around Winnie Madikizela-Mandela's involvement in Stompie Seipei's murder unfolded.

His new book, I Beg to Differ, Ministry Amid the Tears is as much the story of his life as it is the story of the church in South Africa.

"South Africa is a very ordinary place. We think we're so special, but we're not. We're just another country at the bottom end of Africa, but we have one thing to give the world… only one thing," he says. "We showed the world for a brief, glorious, wonderous moment what a country looked like when people of different cultures, races and languages actually decided to live together and to be better people and make a better country."

But 24 years later, Storey fears, we have descended into pettiness, with politicians who serve their own interests only. We have suffered the "shrinking of the moral capacity of people in Parliament", he says.

"The beauty of that time was that people looked at each other and knew that each had played a part, however small it may have been, to build something beautiful. In 1994, we had a Parliament of giants and we gave it away.

"There's a part of me that is deeply grateful to have been able to be a part of that history. Part of me is also ashamed at the silence of parts of the church at that time. Also in the years after the liberation, when the leadership of the church didn't understand its task during freedom. I think the answer is that people in political power don't really change. They have a DNA which needs to be called out and held accountable. Because they have power, and power corrupts."

But everyone must play their part. That is why Storey wrote an open letter to President Cyril Ramaphosa earlier this year to implore him to show moral courage in his position as leader of the country and the ruling party.

White people must also be careful to think the past is over and done with, he says. Storey warns that the longer they stand back and complain about what's going on in the country, instead of getting involved, the sharper and more impatient the cries of black people calling for the fall for historical injustice will become.

"For me, white people failed the truth commission. They never attended, they pretended it wasn't happening or fired pot shots at it. That was a grave mistake. Black people watched that; they watched this moment where there was an opportunity to say sorry, and in so many of the hearings I attended there were just a handful of white faces," he says.

"I think we're paying a price for that now. We mustn't moan too much if black people aren't as impressed with our sincerity."