There is something for everyone in this new bicycle museum (Photo: Oakpics)

A weekend celebrating the bicycle as the most efficient form of transport during the Bikes and Blossoms tour, culminated in the opening of Africa’s first bicycle museum.

"During lockdown we had some spare time and came up with the idea of a bike museum as we had some extra space alongside our conference space. I was introduced to Wayne Harley from the Franschoek Motor Museum, who has many bikes that are not on display," says Trail’s End owner, Pieter Silberbauer.

"The very next week Mike Bruton arrived on our stoep, exclaiming that he thinks we should open a bicycle museum. We bought the bicycle collection from the Cape Town Science Centre and signed a loan agreement with the Franschhoek Motor Museum." 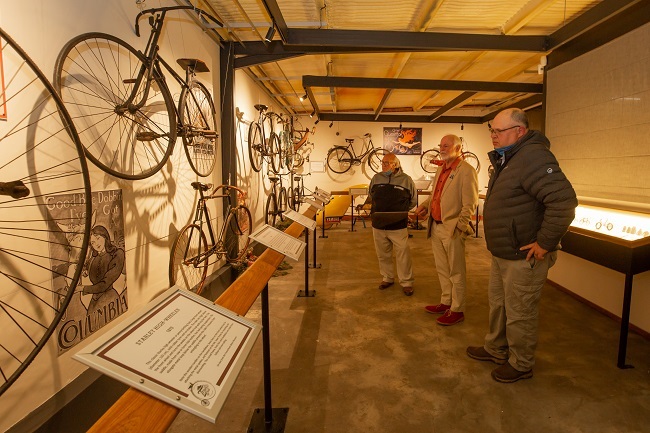 If you are a bicycle geek, this museum must not be missed (Photo: Oakpics)
Ride24

"Wayne and Mike have been fantastic in their assistance and support in getting our small bicycle museum up and running. Mike has spent days here helping curate the museum," adds Silberbauer

The core collection now contains 24 historically significant bikes. The journey starts with replicas of Leonardo da Vinci’s design from the 1500s and a boneshaker from the 1800s. You will want to take some home

In addition to its 24 curated pieces, the museum also features several bikes from the 1960s and 1970s. There are even some from the early days of mountain biking.

The walls are adorned with old cycling posters and advertising pieces that really help paint the picture with regards to the development of the bicycle. A walk through the collection shows the ingenuity and trial and error as bicycles developed in line with the needs and improvement of roads.

"As far back as the early 1900s bikes were fitted with Sturmey-Archer hub gears and even shaft drives, showing that designers have always been pushing the limits and looking for the next best thing. Ultimately the museum reminds us where we have come from," says Silberbauer The museum is cleverly configured with all relevant information, pertaining to each bike (Photo: Oakpics)
Ride24

The hotel where riders rule

Along with a vast network of trails, a hotel, a bicycle repair workshop and now a museum, Trail’s End offers a complete cycling experience.

"Lockdown was a tough time for the hospitality industry, but we spent that time maintaining and building trail. After each lockdown, the number of cyclists seems to have increased exponentially. And not only cyclists: hikers, walkers, runners – everyone seems to want to spend time in the great outdoors," says Silberbauer Come to look - and stay to ride

Trail’s End hotel guests can easily ride three extensive loops over a weekend without crossing the same trails once. There are 16 rooms that allow riders or trail runners to relax after a fulfilling day outdoors.

The Grabouw Development Agency trail builders are working on a single permit system, making things simpler for riders and encouraging investment and job creation."There are amazing bicycles available now for every application – not to mention e-bikes. We see Trail’s End as a hub of excellence where people come together in a spirit of camaraderie with the bicycle as the common denominator."

"It is the most energy-efficient means of transport ever invented and so is more relevant now than ever before," concluded Silberbauer.