Blood and mud at a Paris-Roubaix for the ages This is pro cycling, at its most vulnerable – and real. (Photo: A.S.O. Pauline Ballet)

For most of this century, one of cycling’s greatest races has not lived up to its reputation. But that all changed this weekend.

The 118th Paris-Roubaix was the first wet one in 19 years. Rainy conditions made the brutal 257km course even more testing and true to its legacy.

Appalling weather delivered all the drama fans could wish for during the most respected and regarded single-day road race.

The Hell of the North has run dry for too many years, with dust being the only complication for riders, as they navigate those 30 different cobblestone sections on the route. This year’s Paris-Roubaix saw rain and mud spray, making all those pave sections treacherously slippery. It also brought some parity to the legendary cycling event, with the first Paris-Roubaix femmes, covering 115km, with 17 of the 30 cobblestone sections.

Most of the pro peloton had never experienced a true Paris-Roubaix, in wet conditions, when it truly earns its reputation, as the Hell of the North.

A Paris-Roubaix is always hard on riders and equipment. The cobblestone sections ruin tyres and numb hands. Crashes are a frequent risk, at the Paris-Roubaix, which is why most Tour de France winners avoid this single-day classic. There are no easy miles, on a Paris-Roubaix (Photo: A.S.O. Pauline Ballet)
Ride24

For the loyal French and Belgian fans, who lined the route, this 118th Paris-Roubaix was true to its billing. The pro peloton was thoroughly humbled by the mud spray and slippery pave.

Team kits were ruined, caked in mud. All those sleek aerodynamic principles that apply to the meticulously designed pro rider bikes and components were of no consequence, with mud splatter reducing the aerodynamic harmony.

Slickly clicking gears, with intuitively rapid shifting, were clunking up and down cassettes, and grinding away steel, toward the end of the race. With all that mud spray, acting as an abrasive, destroying drivetrains. 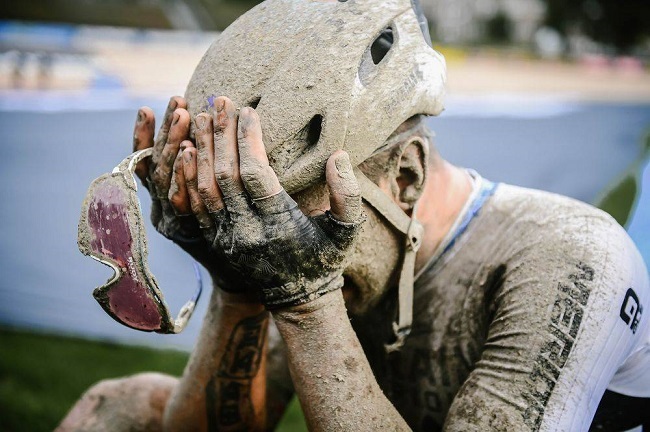 With the sheer volume of mud spray, from all those rotating tyres, many riders struggled with eye problems (Photo: A.S.O. Pauline Ballet)
Ride24

At times, the Paris-Roubaix peloton looked more like competitors at a mountain bike race – which is the way it should always be at this race, according to cycling traditionalists.

Vision was a significant issue for most riders. With their optics rapidly covered in mud, many riders had to stash their sunglasses and ride forth without any eye protection, with some developing severe eye strain due to the mud spray.

In the end, Italy’s Paris-Roubaix debutant, Sonny Colbrelli, won a thrilling sprint in the last kilometre of the race.

The inargurual Paris-Roubaix femmes winner was British rider, Lizzie Deignan. She finished the race with blood strained handlebars – a testament to the unforgiving nature of those cobblestone sections.