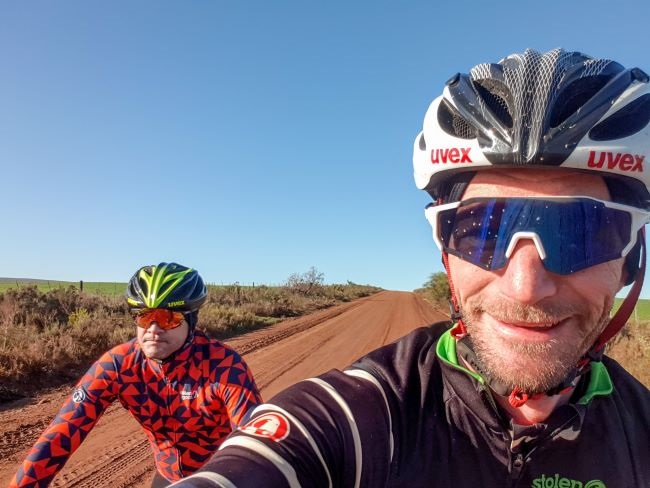 It is all fun and games, rolling along on a level dirt road. But the real Cape Epic test, is when it gets steep – either climbing or descending. (Photo: Ashley Oldfield)

Winter is coming to an end and base training season is nearly here.

Traditionally, October is the beginning of base training for the Cape Epic riders locally. The days are longer, the mornings a little warmer and springtime usually trains your sinuses to deal with an overload of pollen and smells.

Let’s not get too far ahead of ourselves as there is still all of September to get through before the hammer drops on ‘real training’. What can you do this month to help you in the Cape Epic? Jumping is always risky, but it is always faster to launch, instead of roll, certain features on a trail. (Photo: Simon Pocock)
Ride24

Too much fitness - and few skills?

I’ve spectated several Cape Epics, and I can tell you that proper mountain bike skills are in short supply.

This is especially in the midfield and those coming in towards the end of every day.

Being an average descending rider is not something to be ashamed of - there can only be one Greg Minnaar, after all. What’s more, it's one of the easier things to train, requires almost no effort and gains you free time, which has a knock-on effect on things like your recovery at the end of the day. Cape Epic pros are all adept descenders, and know when to get air, to go even faster. (Photo: Simon Pocock)
Ride24

All riders can benefit from a skills experience

Ego is the issue that prevents most men from booking a skills course, which is silly. A skills course at an intermediate or advanced level is never a bad idea.

My partner for next year’s Cape Epic decided it was high time he looked into improving his descending and booked himself a skills course with Rubber Side Down in the Western Cape. I’m sure there are various skills guides around the country.

He is a capable rider, races the Western Province XCO series and has tamed (and been tamed by) a few black-graded routes around Cape Town. He’s anything but a novice rider, but realised that there was a lack of confidence when things got fast and steep, on a singletrack descent.

After a two-hour session, focusing on a single trail and repeatedly riding it with a coach to introduce improvements, he feels like a more complete rider. Improved cornering skills, especially in dusty switchbacks, are a big benefit for Cape Epic riders. We are going to work at this next. (Photo: Simon Pocock)
Ride24

Changing posture to jump with confidence

The major takeaway from this session was a slight adjustment of bodyweight backwards, something that doesn’t come naturally and has to be remembered every time you drop into a downhill trail. This also helped mitigate some of the nose-down first landings he struggled with over jumps or humps.

I've watched him do this for years, but aside from noting it, I had no accurate advice to give him to fix it. I'm not a good teacher, as everything I have learned was ingrained as a kid on MX bikes and building jumps in my garden, so it's more instinct than technique.

Another course is planned for this month where the focus will be more on improving speed, cornering and inserting larger amounts of air between the ground and tyres. All of this translates to confidence on the bike as we advance and freeing-up speed on descents. These are the kind of singletrack Cape Epic sections, where downhill skills can net you a tidy time gain. (Photo: Gary Perkin)
Ride24

Over the last few years, the Cape Epic has become more technical. Those long stretches of jeep track on the route are being replaced with more of the Western Cape’s evolving single track trails, featuring some testing descents.

Improve your descending by a little bit and the time compounds across every section throughout a Cape Epic stage. Being a faster descender over a 100km stage could gain you 15-minutes, but the best part is that it costs you no extra effort or energy.

Improved descending skills reduce your injury risk on those technical trail sections of the Cape Epic route. But there are other benefits, too. You get to the finish line earlier each day. You can start your recovery earlier. And you haven't held any riders up or frustrated riders behind (hopefully).

Now is the best time to work on your descending skills for Cape Epic. There is the risk of falling or possible injury, but if it's going to happen, you have time to heal before the Cape Epic 2023 start in March.

September also marks a big month for the 2023 Cape Epic as the route announcement occurs. Excitement lurks as we finally see what the organisers have in store for us next year.

We live in a world where facts and fiction get blurred
In times of uncertainty you need journalism you can trust. For 14 free days, you can have access to a world of in-depth analyses, investigative journalism, top opinions and a range of features. Journalism strengthens democracy. Invest in the future today. Thereafter you will be billed R75 per month. You can cancel anytime and if you cancel within 14 days you won't be billed.
Subscribe to News24
Next on Life
Why GoPro’s Hero 11 Black is a masterful MTB action camera