Cape Epic Stage 1 – a reality check for all riders 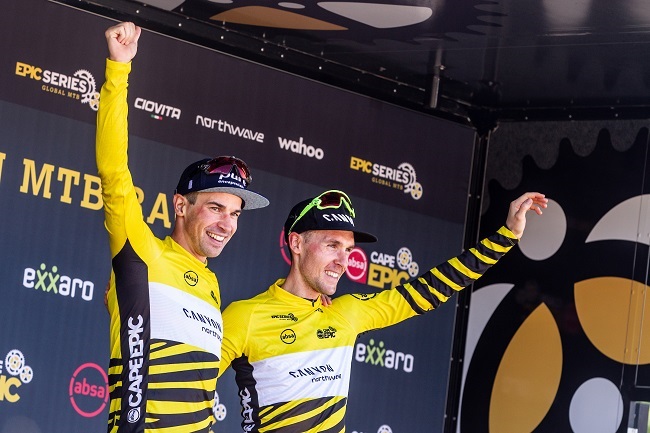 Cape Epic wisdom dictates that a good prologue never guarantees a great Stage 1. And the first 'real' stage of this year's Cape Epic proved this to be fact.

Although the trails were terrific, with great singletrack descents, the 92km route punished riders with 2850m of climbing. And many of those climbs were of the sharp and steep variety.

Riders were granted very few free meters on stage 1, to spin out the legs and recover. In the women's race, five-time Cape Epic winner Ariane Lüthi and teammate Amy Wakefield were in control for most of the stage, until a mechanical forced them to stop. This allowed Argentina's Sofia Gomez Villafane and American Haley Batten, to take the win for NinetyOne-Songo-Specialized. The South African team of Candice Lill and Mariske Strauss, were thrid.

For the men's category, European rider depth and talent was evident. A tough day for the defending Cape Epic champ

Seewald and Stošek take the overall lead into stage 2, followed by Becking and Dias, with Maxime Marotte and Keegan Swenson third overall, on the general classification timesheet.

Prologue winners, Matt Beers and Christopher Blevins, struggled through stage 1. On occasion, the defending Cape Epic champion received a push from his American teammate, but the pair could not stay with the lead group.

Beers and Blevins finished the day in 12th and dropped to eight position, in the overall rankings. It only gets harder from here

After a nightmarish prologue with tyre and wheel issues, Nino Schurter and his Scott-SRAM teammate, Lars Foster, had a point to prove on stage 1. Amazingly, Schurter again suffered from tyre issues. Despite this, the Scott-SRAM team rode strongly to finish in fifth place, for a general classification of seventh.

The Cape Epic peloton transitions from the Helderberg area to Greyton, for stage 2. It is much longer stage, measuring 123km.

Stage 2 has a route profile that sees 2350m of climbing. It will be another severe test for the riders. Especially those amateurs and foreign teams unaccustomed to the Western Cape's heat and dust, this time of year.