Most 8-year olds are entirely satisfied to lap the driveway on their bikes, but Sebastian Flynn is not your regular kid on a bike.

Despite his tiny stature, he’s an absolutely fearless and outrageously skilled mountain biker.

From a very tender age Sebastian showed immense promise on a bike. Whilst visiting the United Kingdom with his parents, Sebastian had his first riding experience, as a 3-year-old. His mother, Gemma, recalls that speed and uncanny natural balance were inherent and skills that her son did not have to be taught.

Based in Cape Town, with its generous year-round riding climate and abundance of mountain bike trails, the SACS Grade 3 learner is completely committed to mountain biking.

His progression and riding skills are astounding. Sebastian is entirely confident and capable of hitting jumps and rolling off drops that many technically skilled adult mountain bikers avoid. He is definitely a better rider than you are

The bike park at Constantia Uitsig became an early venue to develop his riding. One of the issues for Sebastian’s parents was that his skills were so advanced, that bikes for riders of his age, were completely inadequate.

Kids bikes are designed to go on gentle cruises along the beachfront or local park. Launching huge airs or racing down technical mountain bike trails are not what they are intended to do.

Sebastian's parents realised that he required a proper dual-suspension mountain bike, scaled to his size. The solution was to buy a Fluid, built by Canadian mountain bike brand, Norco.

This bike is everything you would expect from an adult enduro mountain bike, repacked at kiddie proportions. It rolls 24” wheels, as opposed to the 29” wheels nearly all adult mountain bikes are configured with, but has configurable front and rear suspension – unlike the bikes that most other kids ride. 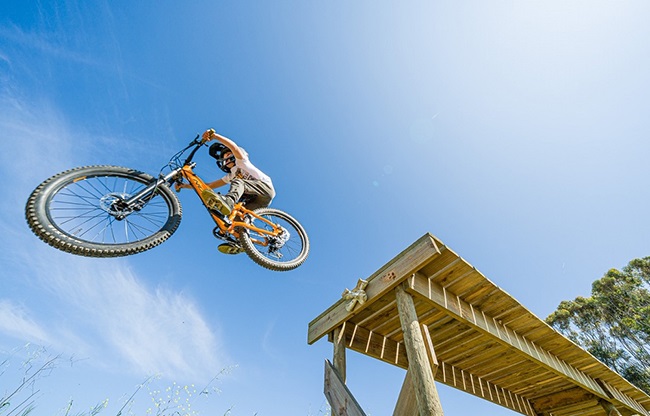 Using skills, instead of strength

The challenges for an 8-year-old rider, attempting the biggest jumps and technically challenging trail features, are rather notable.

Sebastian does not have the leverage or mass advantage of an adult or teen rider, enabling him to influence how his bike leans or balances in rough terrain. This means he must rely solely on precision, commitment and flow, instead of strength and body angles, when navigating steep trails or rolling into large jumps.

Another aspect many mountain bikers might underappreciate, concerning Sebastian’s amazing riding, is the issue of grip strength. Handlebars, grips and brake levers are ergonomically designed and proportioned for adult hands, not those of an 8-year-old.

Despite this, Sebastian just keeps on getting faster and rolling into larger jumps. He is inarguable one of South Africa’s best prospects in the realm of extreme mountain biking.

If you see a small kid preparing to roll into the steepest trail or biggest jumps in and around Cape Town, don’t worry. He knows what he’s doing. Enjoy witnessing the moment and marvelling at his skill.

We live in a world where facts and fiction get blurred
In times of uncertainty you need journalism you can trust. For 14 free days, you can have access to a world of in-depth analyses, investigative journalism, top opinions and a range of features. Journalism strengthens democracy. Invest in the future today. Thereafter you will be billed R75 per month. You can cancel anytime and if you cancel within 14 days you won't be billed.
Subscribe to News24
Related Links
Cycling as a couple – without conflict
Get organised with the Thule Bike Duffel
Specialized use Stellenbosch for elite team training camp
Next on Life
Santa Cruz's most influential MTB frame can now carry snacks – safely