From London to the Rugby World Cup by bicycle Fell + Co’s debut full-length feature Everything In Between premieres in Cape Town on Wednesday.

The film has been two years in the making and documents the epic saga of Ron Rutland and James Owens’ who cycled 22 000km across Europe and Asia.

Raw, real, and liberating in this time of world-wide lockdowns and disunion, it is an inspirational exploration of human connections and a glimpse into just how much good there is in the world.

What started as a rather simple, but very ambitious, plan of transporting – by bicycle – the match whistle for the opening game of the 2019 Rugby World Cup from London to Tokyo, turned into an extraordinary adventure into humankind.

An eye-opening window into countries and cultures shrouded in misconception and political propaganda.

Set to the backdrop of some of Eastern Europe and Western Asia’s most spectacular and rarely-seen landscapes and overlaid with music by international composers, Jason Tse (Hong Kong) and Nathaniel Edgar (Canada), as well as tracks from local South African artists Wild Eastern Arches and Alice Phoebe Lou, comes the endearing tale of Rutland and Owens’ encounters with the local people of the regions.

Laughs, punctures, beers, pain and tears: 20 000kms in 230 days - that it was a feat of endurance goes without saying, but the story of the production of the film is almost as impressive as the fortitude (both physical and mental) it took to pedal across 27 countries.

"The initial project brief was to create social media content for one of the Rugby World Cup sponsors, DHL, to help build hype ahead of the event," explains the film’s Producer Greg Fell.

Fell added: "As the story progressed – and especially when the drama really started to unfold in the second half we realised that there was a film here, fortunately, our partners DHL, who spent a good deal of time on the ground during the expedition, saw it too.

"It shows what is possible in the story-telling space, where brands become ‘Executive Producers’ - a trend that is working seamlessly internationally." 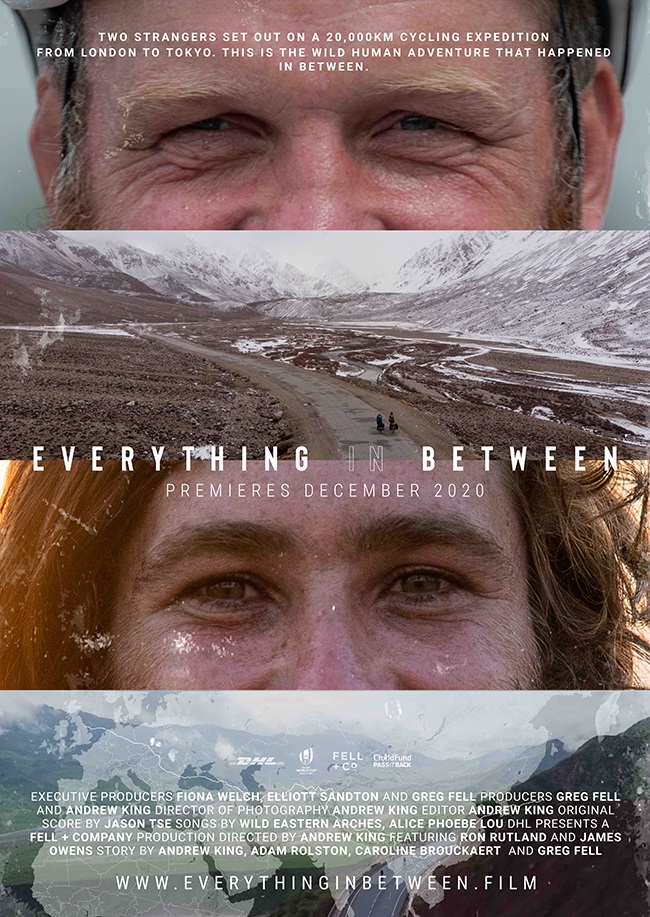 Everything In Between film poster.

Stay updated on the latest cycling news by joining our Instagram community.

We live in a world where facts and fiction get blurred
In times of uncertainty you need journalism you can trust. For 14 free days, you can have access to a world of in-depth analyses, investigative journalism, top opinions and a range of features. Journalism strengthens democracy. Invest in the future today. Thereafter you will be billed R75 per month. You can cancel anytime and if you cancel within 14 days you won't be billed.
Subscribe to News24
Related Links
South Africa’s only major mountain bike race for 2020 is going to be hot
Adidas relaunches its cycling gear business with new road shoe
Next on Life
CAPE EPIC 2023 | Training and data log 4 - when less is more