BMX purists will notice the huge wheels and mountain bike frame. But who cares? Just look at those colours. (Photo: GT Bikes)

With the rising tide of cycling, there’s been a renewed interest in classic BMX bikes – and not for racing or doing kerbside tricks. But for nostalgia and commuting to the coffee shop. Those riders who were part of BMX’s popularity peak in the mid-1980s, are now nearing middle-age. And they pine for memories of bikes and colourways that were dear to them, in their youth.

Bike brands have responded in kind, and few have more BMX legacy than GT. The American brand might be better known for its trail and enduro mountain bikes, but GT also catalogues some of the most desirable BMXs ever built.

To celebrate all things BMX, GT has revealed the new Rad Pro Series BMX. And if you are well versed in the history of BMX, the word 'Rad' needs no introduction.

Remembering a movie so bad - it became good

What Point Break was to surfing, the movie Rad was to BMX. Although Rad remains one the worst movies ever released to theatre, it has become a cult classic and remains dear to BMX fans.

To celebrate the 35th anniversary of Rad, product planners at GT have made a BMX commuter, perfect for middle-aged riders who want to cruise the promenade or down to their local park.

Using a GT 29er hardtail mountain bike frame, this Rad Pro Series is much larger than a true competition-specification BMX. But the point is not having actual BMX racing geometry or wheel sizes, but rather those colours and graphic design elements from the 1980s. 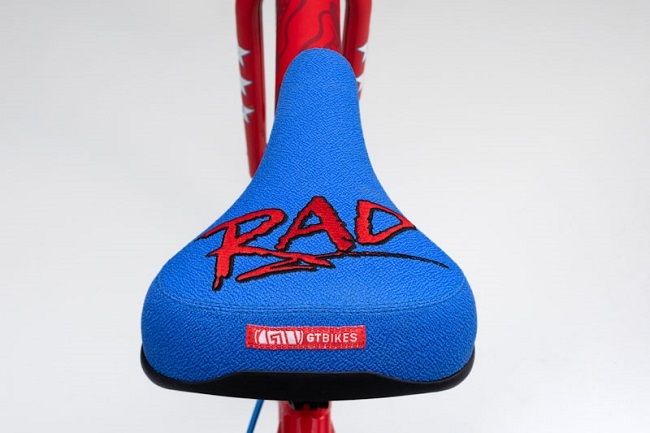 Great for that singlespeed ride to the beach or park. But not a comfy seat, for the Cape Epic. (Photo: GT Bikes)
Ride24

Keeping true to the Rad movie bikes, this GT heritage version has a blue seat and set of bonus decals (for riders to personalise their bikes).

There is a pad set, too, and with a red frame and steel fork, contrasting with those blue grips and seat, this GT Rad Pro Series BMX is terrifically 1980s.

GT’s Rad Pro Series BMX is the answer if you want to channel your middle-age Cru Jones without the crash risk or aching knees.