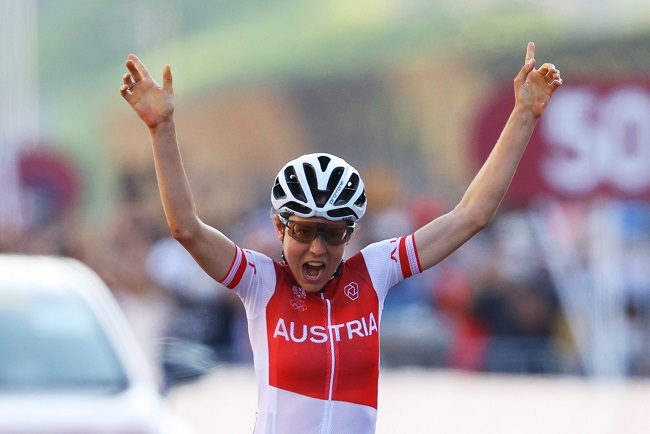 Anna Kiesenhofer knew what the numbers said, and used it, to win (Photo by Tim de Waele/Getty Images)

Most of the high-performance events at any Olympic Games are dominated by professional athletes.

People solely committed to the pursuit of their athletic endeavour. They sacrifice relationships and dietary freedom to train and eat with the specific goal of peak performance.

Impressive as professional athletes are in World Championships events, there is something romantic about the dashing polymath achieving at an Olympic Games.

The unexpected can still prevail. And in the women’s road race that is exactly what happened. From adapting to the heat and humidty, to knowing when to break, Anna went by the numbers (Photo by Tim de Waele/Getty Images)
Getty Images

A strategy all of her own

Austria’s Anna Kiesenhofer made an audacious break early on and maintained her ascendency to grab gold. Before the race she was hardly considered a contender.

Competition road riding is a lot more about strategy than mountain biking. And the Austrian was a lone agent in Tokyo. She could not count on teammates to sacrifice themselves for her in the hope of dragging her along in the aerodynamic wake.

The Dutch were expected to dominate the women’s race. But inexplicably amateurish tactics, amplified by the absence of team radios and lack of communications between the riders, undid the Dutch effort. Anna, on a training ride, in the Swiss Alps. She balances a demanding math research schedule, with pro-grade training (Photo: FB)
Supplied

Beyond the individual brilliance of her win in Tokyo, what makes Kiesenhofer an intriguing gold medallist is her versatility and adaptability.

A very late convert to competitive road cycling, she only started riding 2014. Even more impressive is her demanding day job: as a theoretical mathematician.

Kiesenhofer has managed to balance an intellectually rigorous career with the training burden of professional road cycling.

Her academic abilities are nearly equal in achievement, to that Tokyo gold medal. Kiesenhofer has a PhD in mathematics, having started her academic journey at the Technical University of Vienna, before an advanced post graduate study at Cambridge.

Her current positions is as a researcher at the University of Lausanne, in Switzerland. This position has the benefit of offering excellent road riding, to accommodate her training requirements.

In an era of android-like professional athletes, Anna Kiesenhofer’s win, has been a revelation.

Much of her win’s tactical brilliance, can be credited to Kiesenhofer’s terrifically agile and logical mind.

She made all the right calculations during the race, whilst her rivals were lost, without team managers whispering in their ear, via team radios.