How an Eastern Cape eMTB event recharged its riders without Eskom E-bikes make the singletrack circle bigger. For riders who struggle with fitness or legacy injuries, e-bikes are hugely enabling.

With the increased popularity of e-bikes in the domestic mountain biking scene, events have responded with e-bike categories. And even e-bike only stage races. But there is an issue: recharging infrastructure.

An e-bike that has exhausted its battery range immediately becomes an overweight mountain bike. And nobody wants to ride a mountain bike that weighs more than 20kg. An e-bike route with lots of climbing

Great trails are often in isolated areas. For many riders, the reward of entering a mountain bike stage race is that journey of discovery.

But for all the appeal of mountain biking in pristine wilderness locations, there is the problem of charging infrastructure. The Great Zuurberg Trek (GZT) is an established stage race on the domestic event calendar, taking in some terrific Eastern Cape trails.

Sensing demand, GZT organisers added a separate GZT-E event. The three-day event saw a route profile of 60km (1450m), 60km (1300m) and 48km (1200m). Those route distances might appear short, but the climbing numbers are significant, with riders venturing onto some great natural trails, from Friday to Sunday.

With the pedal-assistance of an e-bike, riders can power up steep climbs while remaining well below their fatigue threshold. That means more enjoyable and safer descending on technical trails.

Riders finishing on Sunday afternoon were impressed by the blend of singletrack and e-bike recharging support. To supplement the GZT-E’s recharging capacity, Rubicon energy and e-mobility supplied an impressive mobile charging station. 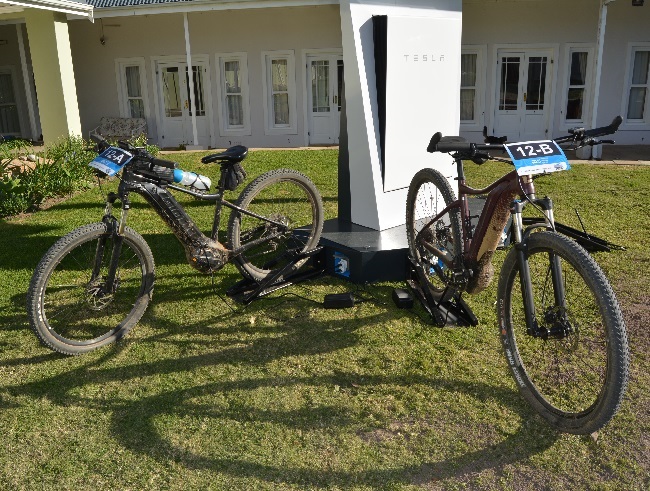 Harvesting solar energy in DC format, the Rubicon recharging rig has AC sockets to make for convenient e-bike recharging. Thanks to converters, the energy conversion flow is from solar DC to AC power. Final output to the four e-bike charging ports, is via a Tesla Powerwall.

The Rubicon is a pure solar e-bike recharging station. There is zero carbon in its energy production. Courtesy of the Tesla Powerwall component, this rig is capable of a 5kW constant power output.

Theoretically capable of charging ten e-bikes simultaneously (with an average-sized 500Wh battery), the Rubicon rig made easy work of keeping the GZT-E field powered-up, during the event.