How strong is SA mountain biking in 2021? 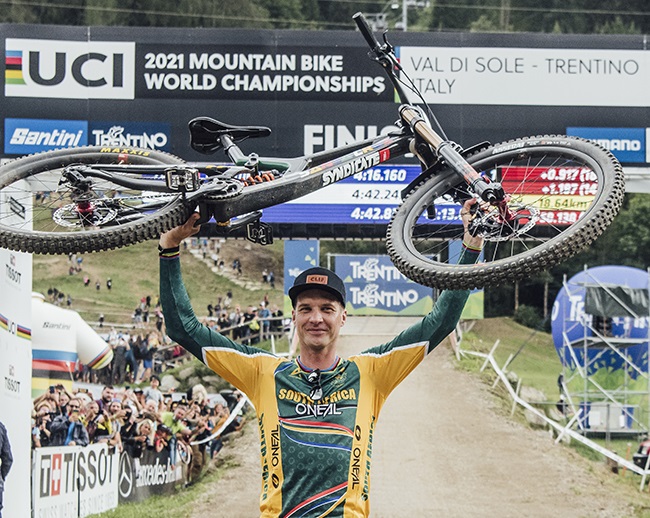 Minnaar has cast a huge South African presence over UCI competition mountain biking for decades. But who are his understudies? (Photo: Red Bull Content Pool)

It is an opportunity to race among the world’s best riders, and show if you are deserving of a new pro deal – or not.

The World Champs is often the biggest event on the mountain bike calendar - even in an Olympic year. It sees huge fields that make starting positions particularly important (determined by your world ranking), especially for the XCO riders.

For two decades, Greg Minnaar has been collecting medals for South Africa, at the UCI mountain bike World Champs. But how did team South Africa perform, beyond Minnaar?

In the junior women’s XCO race, our riders were using the opportunity to gain experience in international racing. Their presence in Italy was to learn as much as possible and develop their riding, returning home with valuable experience and the hopes of lifting their level and improving the local level of our junior riders.

Madison Mann and Andrea Schoffmann both finished on the lead lap and came home 54th and 55th out of the start list of 70 riders.

We had four riders on the start list in the junior men: Kai von During, Luca Ruwiel, Matthew Scott and Gunther Katzke. A vast grid of nearly 100 riders made for a chaotic race, with our best-placed rider at the finish being Kai, who placed 47th.

Luca Ruwiel came home in 62nd while Matthew Scott suffered a DNF after running in the mid-pack for the first lap of the race. Gunther Katzke ended his junior world debut two laps down on the eventual runaway winner from France Adrien Boichis.

Martin Vermeulen was also making his debut in the downhill competition but couldn’t set a timed run in the qualifying heats to make the finals.

Mechanical issues for some of the more 'senior' juniors

She was unlucky to fall foul of a puncture and had to run her bike to the tech zone for half a lap. Too much time was lost with her puncture issue and she ended retired from the race.

The under-23 men also had mixed results, with Daniel van der Walt initially riding well before crashing and fracturing his thumb with two laps to go.

South Africa’s highest place rider was Johan van Zyl, who steadily worked himself from a starting position of 73rd to a finishing classification of 35th. Our other two riders, Keagan Bontekoning and Unathi Nxumalo, both suffered misfortunes and could not finish on the lead lap.

The reality of asthma and elite racing

Our elite ladies consisted of Candice Lill and Mariske Strauss, who are regulars on the World Cup circuit. They made a good go of the short track race finishing 11th and 20th, respectively.

Lill managed to bring it across the line in 30th against a much bigger field in the main event, crossing the line ahead of World Cup winner Annie Last.

Mariske suffered an asthma attack halfway through the race, dropping her down the field and eventually finishing a lap down.

Our hopes of a medal in the men’s short track event rested with Alan Hatherly, who appeared in great form during the qualifiers, winning his heat. SA Marathon champ Matt Beers was also going through to the final, who squeezed in as the last qualifier in his heat.

In the main event, Hatherly pushed the pace at the front in the early laps, covering any attacks from other riders. In the end, he came home a solid 5th, not more than a few seconds behind the winner, America’s Christopher Blevin.

The main event saw Hatherly fight for a top ten finish throughout the race. He suffered from cramps early on before coming home strong and on the last lap, to place 8th.

Matt Beers struggled on the day after showing much promise throughout the season thus far.

Arno du Toit was the other SA rider on the grid and put in a decent showing proving the be the 56th best rider in the world on the day.

A puncture for our e-bike rider

The e-bike UCI World Championship race saw its third running. Our very own Alan Hatherly was the first ever e-bike world champ.

Renowned Western Cape enduro rider, Matt Lombardi, was South Africa’s e-bike competitor. He was hovering around 10th place before a final lap puncture put him out of contention. To Lombardi’s credit, he ran his way to the finish line, securing himself 20th position overall.

Sabine Thies was our only female downhiller to make the final event.

She found her way down what many consider the steepest downhill course on the current World Cup circuit, to finish 26th overall.

The downhill track was brutal - and it showed

Our three male riders that were through to the downhill finals put on a good show and result. The physicality of the track was visible as multiple South African champion, Johann Potgieter, noted how he was ‘broken’ coming into the last section of the track, unable to push as hard as he wanted to. He ended up 61st overall.

Theo Erlangsen put in his best World Champs performance with 36th overall. His run nearly came unstuck right at the end as he had to dab a foot to keep upright in a high-speed berm.

As expected, South Africa won gold medal in the downhill and it belonged to the greatest rider of all time, Greg Minnaar.

He racked up his fourth World Championship at the age of 39, showing that wild downhill mountain biking isn’t just for youngsters. A clean run was essential on the brutal course and nobody puts down a clean run better than the man referred to by the paddock as ‘Mr Min’.

But the question is: who will replace him, as South Africa's lead medal contender, in future?