How the Cape Epic floating MTB bridge was built The THIRSTI floating bridge was a standout feature on Stage 3 of the Cape Epic (Photo: THIRSTI)

Tulbagh is an inspiring mountain biker’s valley, but it was a brutal venue for this year’s Cape Epic.

With temperatures edging towards 40-degrees Celsius, the Tulbagh valley humbled all Cape Epic riders during Stage 3. Even the pros were riding with hydration backpacks, which is never the case.

There are very few easy meters on any Cape Epic, but along the toilsome 91km of Stage 3, riders had the opportunity to beat the heat for 100m of waterborne riding. Bridges are not a new feature at South African stage races. But this year’s Cape Epic saw an innovative approach to bridging a dam, on Stage 3.

The Cape Epic’s hydration sponsor is THIRSTI, which sources most of its product from the brand’s place of origin in the Klein Drakensberg. An instance of singletrack serendipity had THIRSTI acquire a new Western Cape property, in Tulbagh, to increase its countywide production and distribution.

Unbeknown to THIRSTI, the Cape Epic route was scheduled to navigate through its Tulbagh farm, which created the opportunity to build a floating bridge.

Sustainability and safety were anchor requirements for this rideable bridge. The solution was a series of interlocking pallets, used by THIRSTI for its product logistics.

Creating a bridge with 'feel'

An initial prototype was tested in a suburban pool, as proof of concept. After that the design was scaled to size and took three days to construct, in preparation of testing at THIRSTI’s Tulbagh farm.

Rigid bridges aren’t great to ride on. It was decided that an interlocking pallet structure with some hydrodynamic movement would give better feedback and feel for riders.

THIRSTI used pallets in combination with recycleable polystyrene. The structure was sealed with shade-cloth to ensure there was no risk of contaminating the dam.

Modularity was another requirement of the design. The THIRSTI bridge had to be easy to assemble, disassemble, move and store – ensuring it could be used again. 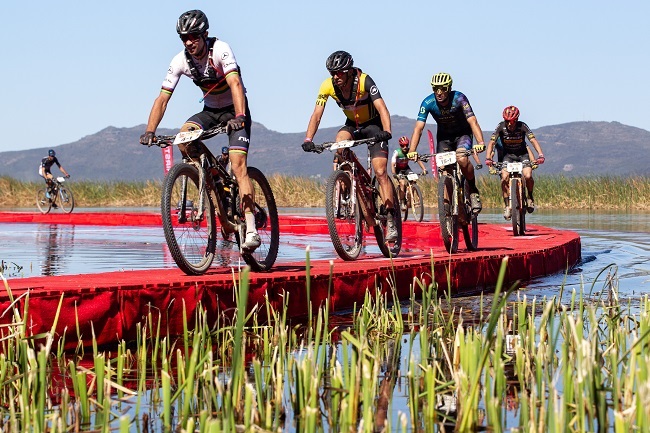 Making sure it worked

Once the construction was complete, a final test run was done by Germany’s Stefan Sahm, a three-time Cape Epic winner. Stefan rode the 100m THRISTI bridge at pro speeds.

To test its traction, Stefan intentionally locked his brakes, simulating a panic moment for most riders. Stefan retained control even with locked brakes and the THIRSTI bridge was validated – ready for the Cape Epic field.

At each Cape Epic there is Queen Stage, considered the most formidable combination of distance, climbing and terrain. An unofficial heat fatigue stage isn’t part of the course design, but an inadvertent Western Cape summer climate outcome.

Tulbagh’s Stage 3 was the heat fatigue stage of this year’s Cape Epic, and for 100m of it, there was some mindful respite as riders rolled along the THIRSTI floating bridge.