Hylton Turvey riding into a KZN sunset with his trail dogs in tow (Photo: Shimano)

To many, Shimano is cycling. The Japanese component brand celebrates a century of innovation this year and as part of its marketing campaign, is a new film all about mountain biking dogs.

If you have been mountain biking for long enough, you will know exactly what a trail dog is. And the joy, they can provide.

Although most of South Africa’s trails are either on private farmland or in nature reserves, which limit trail dog interactions, we do feature in this new Shimano film. Hylton Turvey is a very accomplished enduro mountain biker, and his trail dogs have no problem keeping up (Photo: Shimano)
Supplied

A film about how good dogs are, at 'mountain biking'

Shimano’s ‘A Dog’s Tale’ was produced by acclaimed mountain bike filmmakers and it shows. The story follows Raven, a retired trail dog from British Columbia.

For those unfamiliar with the athleticism and ability of trail dogs, this new film will be a pleasant revelation.

Trail dogs are often quicker than many mountain bikers over challenging terrain and hardly shy away from jumps and other technical obstacles. Their inherent balance, four paw contact points and low centre of gravity make them ideal at chasing after mountain bikers on a singletrack descent. 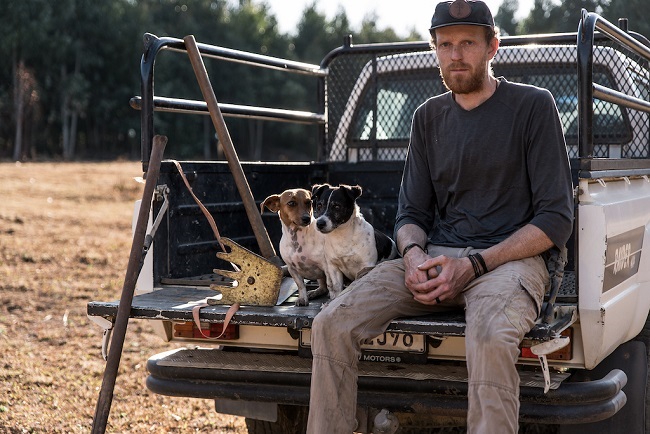 Lucy and Syd, ready for a day out trail building, in KZN (Photo: Shimano)
Supplied

In ‘A Dog’s Tale’, the film crew journey from Canada to South Africa, where they meet renowned trail builder, Hylton Turvey, and his trail dogs: Lucy and Syd.

Turvey has created an incredible mountain bike trail network within the KZN midlands, spread all across the inspiring Karkloof.

Long days of digging and trail building, in isolated areas, are made a lot easier with the companionship of his trail dogs. And they aren’t shy of testing the new singletrack lines that Turvey builds - or chasing their owner on his mountain bike.

South Africa might lack the ubiquity of trail dogs and freedom for them to roam, compared to Canada, but our trail dogs have all the energy and skills. As Shimano’s ‘A Dog’s Tale’ proves.