Peter Sagan might never win the Tour de France, but he remains the most bankable name in cycling.

Global cycling fans adore the characterful Slovak sprint specialist. And his love of riding, any type of riding, is evident.

Despite making his name in road racing, Sagan’s first success came on mountain bikers. He won the junior World Championship, in Val di Sole, Italy, back in 2008. 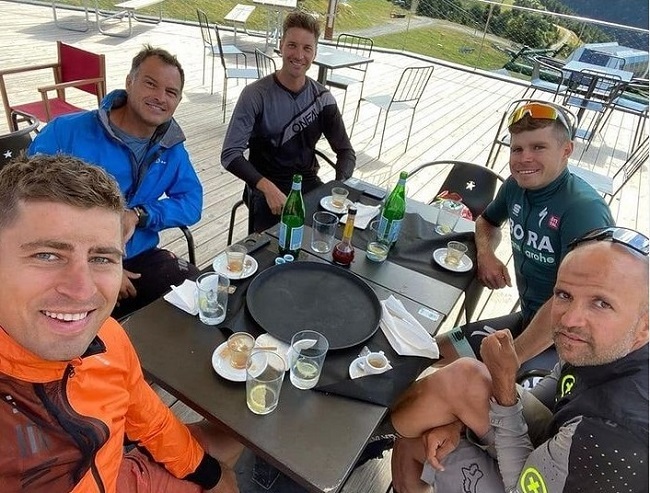 Sagan on the left and Minnaar in the middle. Probably the most celebrity coffee moment in cycling, this year (Photo: @petosagan)
Ride24

Getting on the mountain bike - to recover

Known as a specialist Classics racer and sprinter, Sagan is a crowd favourite for his daring style. The enigmatic Slovak has never completely disengaged from riding off-road trails despite the risk of injury when mountain biking.

He looked strong at the 2016 Olympics until mechanical issues scuppered his chances. Surgery kept him out of the Tokyo Olympics.

With most of his European road racing commitments fulfilled for the year, Sagan has gone to Andorra for post-surgery training and recovery.

The tiny Pyrenean principality has some of the world’s best and steepest mountain bike trails and Sagan has been enjoying them.

The best of the best

Renowned for his bike skills, Sagan is a lot more confident on technical mountain bike trails and jumps than you would expect a Tour de France rider to be.

The Slovak three-time World Champion even got to lead a run down one of the best Andorran trails, followed by none other than South Africa’s Greg Minnaar.

"It was a pleasure and a privilege to ride and get a coffee with Greg Minnaar. It was a moment I will always remember. He's a great rider and a cool guy."

It also proves that he could have been a significant podium, or even gold, finisher at the Tokyo mountain bike Olympics.