The Greg Minnaar story has gained another chapter of greatness, as the 39-year old won his fourth World Championship.

Racing on one of the steepest and most technically demanding downhill tracks in Europe, Minnaar proved unbeatable in Val di Sole, Italy.

Conditions remained dry throughout the race weekend, and after qualifying confidently, Minnaar’s race run was tremendous. 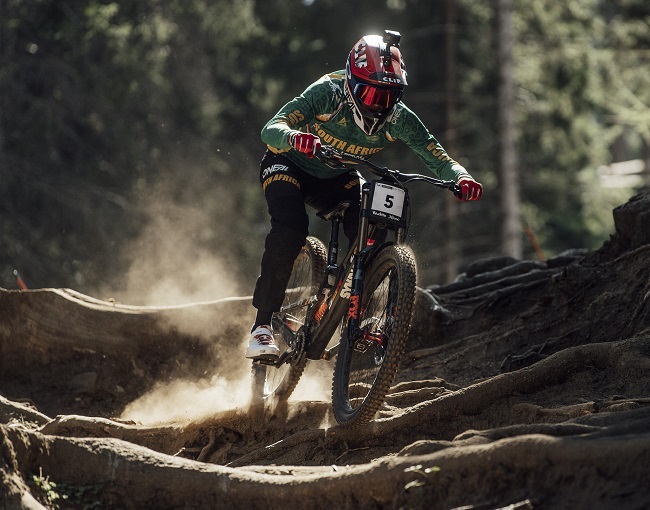 A career of incredible numbers

Some of his rivals in Italy weren’t even born when Minnaar starting racing downhill mountain bikes.

Although his size makes Minnaar appear effortless on the bike, it was clear that he was very committed during his race run. Some daring lines down the steep root chutes and a dramatic rear-wheel landing on the ski-jump section, showed that Minnaar wasn’t taking it easy.

In the end, Minnaar won by 0.227 seconds from Frenchman, Benoit Coulanges. Australia’s Troy Brosnan was in third place. Already heralded as the greatest downhill mountain biker of all time before this season’s World Championships, this fourth win will only solidify the KZN local’s reputation.

What makes Minnaar’s career so unique is the incredible attrition rate of downhill mountain bike racing. The crash risk is enormous and many riders can only recover from one or two dramatic crashes, before being forced to retire. The Val di Sole was steep and loose, in placec. Not that any of this, mattered, to Minnaar (Photo: Red Bull Content Pool)
Ride24

Defeating Covid - and all his rivals

Minnaar has been racing at the limit, on the world steepest, fastest and most dangerous downhill mountain bike trails for more than two decades.

He remains dominant in a sport where most of his competitors are more than a decade younger than him.

Committed training and the nurturing of outrageous natural bike riding talent has delivered a career of unprecedented longevity for Greg Minnaar. And his latest World Championship win comes after having his off-season preparation disrupted by Covid. A memorable win, in the pandemic era,