Regarded by some as the most multi-skilled rider of his generation. Pidcock’s rookie win, could be the first of many. (Photo: A.S.O/Charly Lopez, Pauline Ballet, Jered & Ashley Gruber)

A daredevil descent lit the fuse for the 22-year-old's win while an explosive acceleration on the final ascent of the Alpe d'Huez finished the job on the final day in the Alps. A great second place for SA

South African Louis Meintjes was second in the stage. Chris Froome, the 36-year-old former four-time winner, was third after he joined an early escape.

Pidcock first caught the escape with a breath-taking descent and then dropped them on the last Alpine climb of this 109th edition of the Tour.

The Olympic mountain bike champion and cyclo-cross world champion's descent displayed bravery that set him apart from the other riders. Using all those mountain bike skills

"On the descent people did not want to risk chasing me," said Pidcock at the finish line. "I learnt that on my way to school cutting through the forest and the mud. My first stage win on my first tour. Not bad."

"Even if I get dropped every day now I don't care," added Pidcock, who climbed to eighth overall.

The British rider said it had been astonishing to ride through such big crowds. Fans were packed on the verges as this Alpe d'Huez mountain above all other climbs on the Tour de France has a repuation for partying bordering on lunacy.

"You have to just pray that they move out of the way, but that was the best experience - box ticked."

Pidcock's Ineos leader Thomas praised the youngster. "He's the second British winner here," he said after his own triumph here on his way to the 2018 title. "It's great for the team. Tour de France winners are made, in the high Alps. And this year’s event, is no different. (Photo: A.S.O/Charly Lopez, Pauline Ballet, Jered & Ashley Gruber)
Ride24

A day after his triumph on the Col du Granon, Danish Jumbo rider Vingegaard, chaperoned by teammates, held off a blistering attack from Pogacar, who is second in the overall standings.

Thomas followed them over the line and climbs to third.

"That was quite an attack from Tadej, so I was happy keeping up," said Vingegaard. 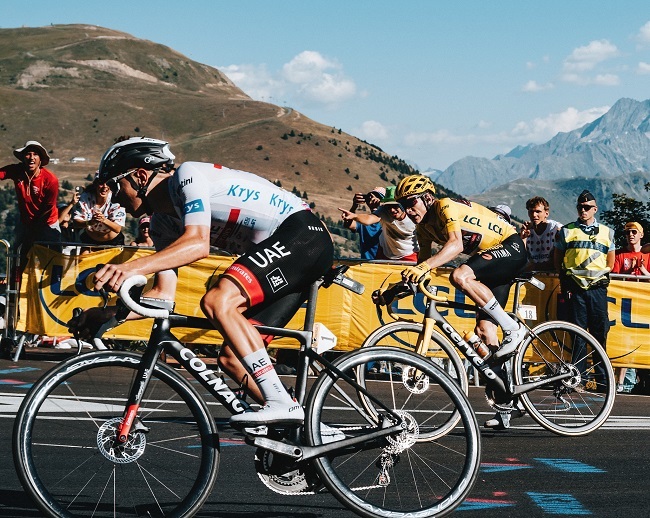 Pogacar rode assertively but was unable to take out all the time he wanted, from the Danish yellow jersey wearer. (Photo: A.S.O/Charly Lopez, Pauline Ballet, Jered & Ashley Gruber)
Ride24

Getting back those minutes

Pogacar appeared disappointed he had not been able to hurt his rivals for the title. "I could have been better, but at least I was there. I suffered yesterday, but hopefully this won't happen again," he said after pulling on his white jersey as the top young rider.

"I feel confident for the days ahead, I need to find a way to get a few minutes back," said the 23-year-old Slovenian who rides for Team UAE Emirates and who lost two teammates to Covid this week.

Thomas was dropped briefly, as he was on Wednesday, before once more racing his own pace and catching up with Vingegaard and Pogacar. "I knew it was going be a bit stop-start," he said in front of his team hotel at the Alpine resort.

"They are both riding really well and when they attack like that it's not worth chasing them." Does Ineos have a plan for Paris?

Thomas hinted a podium place may not signal the full extent of his ambition but admitted that a lot can still happen before the riders get to Paris. "You have to expect the worst and hope for the best," he said. "It's not just the two of them, anything can happen."

The valley below the Col de Croix de Fer where Pidcock attacked was the hottest part of the stage with temperatures in excess of 38-degrees Celsius before the final ascent.

Oddball fans such as a knight in full armour, Supermen and Spidermen galore and a bacchanalian rave at the celebrated corner number seven, where the Dutch fans gather, provided an amazing farewell to the Alps, where Bastille Day celebrations looked likely to go long into the night.

Friday's stage moves out of the Alps with a 192km run to Saint-Etienne with three hills but no mountains until three stages in the Pyrenees next week.