New Ritchey Ascent could be all the bike you ever need This new Ritchey, is ideal as a 'one-bike-for-all' option (Photo: Ritchey)

The name Ritchey is synonymous with cycling and mountain biking.

By the time Tom Ritchey had graduated from high school in the early 1970s, he had built approximately 200 frames and had perfected his fillet brazing technique.

Ritchey built frames without the use of prefabricated lugs. This method allowed for the use of larger thin-wall tubing to create lighter, stiffer frames.

The Ritchey brand is like no other. It is one of the few iconic brands that have remained rider focussed at the core. Founder Tom Ritchey still does duty as president and lead designer while riding 16 000km a year. Ritchey is a trendsetter and apart from his innovative frame building techniques, can be credited with many brilliant concepts. The one-piece Bullmoose handlebar, cartridge-style bottom brackets, front/rear-specific tyre tread patterns, and many more.

He was one of the pioneers in the early days of mountain biking and always looking at ways to improve the equipment.

Committed to this theme, the Ritchey Ascent has been upgraded to cater for modern riding and touring requirements. 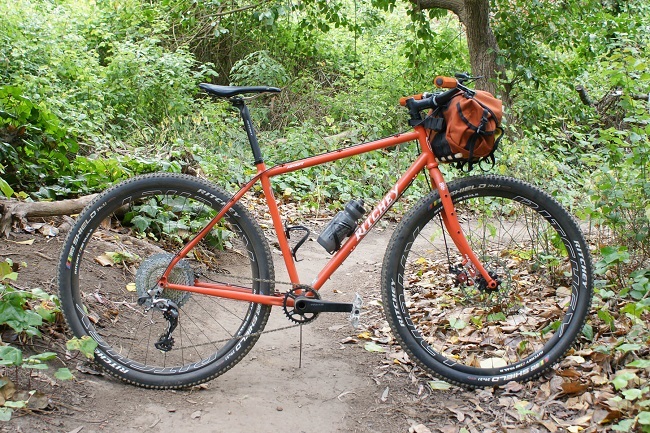 It be many bikes - all in one

The adventurous soul of the Ascent remains but now features enhanced modern features and details. Tom Ritchey himself designed the latest version of the Ascent to be a do it all adventure bike.

The frame is tig welded with heat-treated, triple-butted Ritchey Logic steel tubing that now includes rack and fender mounts and a multi-purpose mount under the down tube.

An updated Ritchey fork features multi-purpose rack, fender and dynamo light mounts, and a drilled crown. A straight steerer allows for compliance over rough terrain while comfortable. It also works with the bike’s fairly long wheelbase, to optimize stability, on gravel roads. Ritchey designed the Ascent to ride like a mountain bike and perform like a touring bike.

The Ascent offers riders a blank canvas. It can be built into a variety of configurations.

With a mountain bike handlebar and 27.5-inch wheels it is ready for trail riding or with drop bars and 29-inch wheels it can chase horizons, while the perfect bike could be a mixture of the two.

The Ascent can accommodate 1x or 2x front chainrings, allowing for a multitude of gearing options. The possibilities are endless with the advent of wireless groupsets like SRAM's AXS and two sets of handlebars. You can add flat bars and take this Ritchey on mountain bike trails (Photo: Ritchey)
Ride24

You can run huge tyres

The geometry of the Ascent remains unchanged and is still on the steep side, but now incorporates added tyre clearance for 2,6-inch tyres in both 29-inch or 27,5 inch diameter.

The global pandemic has forced a change in cycling events, with adventure touring replacing racing. Bikes like the Ritchey Ascent speak to the need for a durable, fast steed and can carry some load.

Are you even a true mountain biker if you have never owned a Ritchey bike?

The Ascent might not be able to do it all, but it will come very close as it allows riders to do much more than a pure gravel or mountain bike.