A Wines2Whales Shiraz win - despite crashing Philip Buys and Gert Heyns raced to a perfect three from three at the FNB Wines2Whales Shiraz.

Despite all three stages of the Wines2Whales Shiraz event featuring the same top three, the racing was exciting throughout. 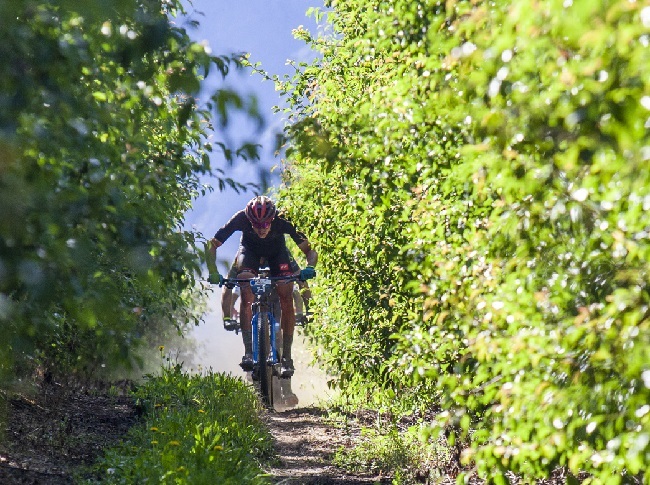 A lot of riding on the final day, was through the orchards and plantations of Elgin (Photo: Sam Clark)
Ride24

Not even a crash, could stop them

Only 1 minute and 22 seconds separated first and second going into the final stage, from Oak Valley to Lourensford. Imbuko Giant were eager to empty their tanks and do all they could to snatch a stage victory on the last opportunity of the race and the season.

The victors, for their part, were relieved to have not suffered too much, during the stage, from Buys’ crash.

The champagne is starting to find all the cuts and scrapes now” Buys laughed, having been doused in Lourensford MCC by Gert Heyns.

"I clipped a tree stump in the A-to-Z trails and went over the bars. Fortunately, despite a bit of swelling above my knee, it didn’t impact my riding at all."

"We were still able to catch Imbuko Giant and put in a last effort to secure the stage win ahead of Matt [Beers] and Wessel [Botha]." Buys and Heyns, having fun on the final stage (Photo: Sam Clark)
Ride24

"Winning the FNB Wines2Whales means so much to me," admitted Heyns. "It’s something I’ve dreamt about for a long time. We couldn’t have done it without all the hard work the PYGA Euro Steel crew put in behind the scenes."

PYGA Euro Steel’s winning time was 7 hours, 33 minutes and 26 seconds. DEV Nanotime were 1 minute and 39 seconds down on the race winners, with Imbuko Giant completing the podium, 10 minutes and 4 seconds back. Most of the day, standing on the pedals

A performance of remarkable resilience was from the Insect Science Pro team, who finished fourth overall.

Keagan Bontekoning of Insect Science Pro, completed the final stage without a saddle after crashing inside of the first 20km. A great return for a very popular stage race

With its 'reverse' routing, from Hermanus to Lourensford, saw some great new descents. The 2022 event will return to the traditional Lourensford to Hermanus route format and is scheduled for 28 October to 6 November.

Riders will again have the option of three different W2W events: Chardonnay, Pinotage and Shiraz format. Entries open on 14 February 2022.

If you want to give the mountain biker in your life a great Valentine’s day gift. Well, there can be little to equal a W2W entry.