The people who are gifted Qhubeka bicycles know about hardship.

They know about walking 20km per day to school or carrying mielie meal for vast distances, to put food on the table.

When donated a Qhubeka bicycle, these recipients are given some mobility, freedom and a way to better their lives. In its essence Qhubeka means ‘to move forward’ and these bicycles allow people to do that. 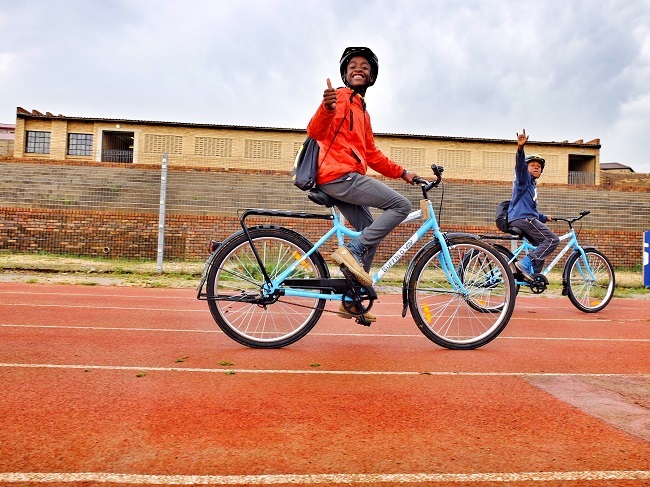 This is what the Qhubeka mission is all about, getting bikes to those who need them most (Photo: Assos Qhubeka)
Supplied

Although these hardships are incomparable, the last few years saw the Africa’s World Tour Team struggle with inconsistent performances due to a variety of factors. At the end of 2020 the team lost their primary sponsor and were left with an uncertain future in an already tumultuous world.

Fortunately, the team managed to continue into 2021 on a shoestring budget and with Qhubeka and #bicycleschangelives now taking pride of place on the centre of their jersey.  With their backs against the wall the team adopting a strategy that costs no money, teamwork.

Donning the Qhubeka jersey has a power of its own. It gives riders a why. A reason to push themselves. TV time means visibility for Qhubeka, a charity that is doing great things. To date the World Tour Team alone has raised funds for over 30 000 bicycles.

Harnessing the power of the why, a reason to perform that literally changes lives, has seen the Qhubeka Assos team have one of their best years on the World Tour to date. At the Giro d’Italia Mauro Schmid, Giacomo Nizzolo and Victor Campenaerts secured stage victories. This means that to date Qhubeka Assos have more victories than any other team in this year's race. The Assos Qhubeka squad has surprised many, with its strong performance at the Giro (Photo: Assos Qhubeka)
Supplied

True unity - at one of the world's toughest races

"For two years we’ve been speaking about Ubuntu in the team, I am because we are – which is about riding as a team. We cannot go alone, we’re stronger as a team together, and the spirit we have in the Giro is building up to an even greater spirit." These are the words of current world hour record holder, Victor Campenaerts, after he secured a third stage win for Qhubeka Assos on the 15th stage of the Giro d’Italia.

"Our mission as a team is to change lives with bicycles and the Qhubeka charity, these successes mean that we play our part in changing the world."

For team principal Doug Ryder, Qhubeka is not just about giving people mobility. For him it is about opening people’s eyes to the sport of cycling and hopefully igniting a passion for riding.

The hope is always to find that next Louis Meintjies or Ryan Gibbons. Riders who graduated through Ryder’s vision, racing on a World Tour team that he created to give African bicycle athletes their chance to shine on the global stage.

Developing riders is a costly exercise but hopefully the team’s recent string of good performances at the Giro, will attract the sponsors that they so desperately need to keep doing what they are doing.