Radiohead has designed a custom bicycle This is the Radiohead Brompton fold-bike, up for auction, soon (Photo: Brompton)

If you love city bikes and music, Brompton has some very desirable machines coming up for auction.

Folding bicycles might look like toys, but they require precision engineering to retain the strength to carry adult riders, whilst also being able to fold.

Brompton is a leader in the fold-bike industry, and in many global cities with an active commuting culture,these steel bicycles with their frame hinges and collapsible handlebars are very popular. 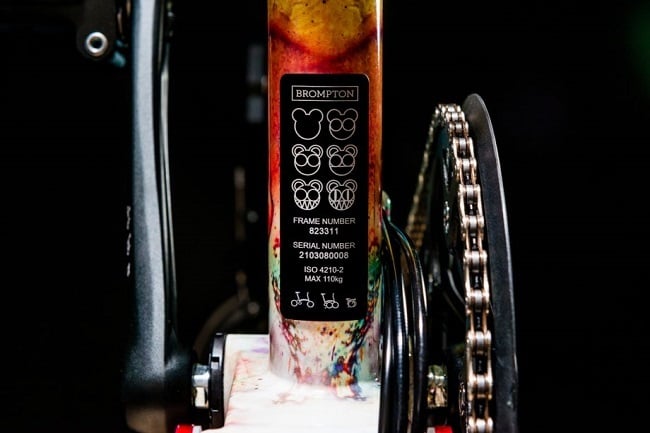 In a show of solidarity with the music industry, Brompton has collaborated with some of the world’s best music artists.

The idea is simple: Brompton provides the bikes, and the associated artists choose their custom designs. What has been created is a collection of custom painted Brompton fold-bikes that have an official association with the Foo Fighters, Rise Against, Radiohead, Phoebe Bridgers, LCD Soundsystem, Khruangbin, Nathan East, Dinosaur Jr, Oh Wonder, Underworld, Sub Pop, Enrique Iglesias and Neko Case.

Fans will have the opportunity to bid on these thirteen bikes through Greenhouse Auctions, an online platform configured to empower artists and promote diversity. Iconic Radiohead graphics, add to the collectible status of this bicycle, for fans of the band (Photo: Brompton)
Supplied

All profits from the Brompton bicycles that are auctioned, will be transferred to Crew Nation. This is a global relief fund structured to support live music crews, who have been adversely affected by lockdown.

Perhaps the most striking of these thirteen custom Bromptons, is the Radiohead version. Its vivid design is the work of Stanley Donwood, known by loyal Radiohead followers as the band’s official artist.

Donwood created a blend of Radiohead’s back catalogue album artwork on the limited surface area of Brompton’s small fold-bike frame.

Applying a bold design to the round tubes of a bicycle can be challenging, but there is no questioning the authenticity of Donwood’s Radiohead creation. It looks absolutely striking.

All thirteen of these custom Bromptons will have an official serial number validating their uniqueness. This is how small the Radiohead Brompton can fold, to stow under a desk or on a train (Photo: Radiohead)
Supplied
We live in a world where facts and fiction get blurred
In times of uncertainty you need journalism you can trust. For 14 free days, you can have access to a world of in-depth analyses, investigative journalism, top opinions and a range of features. Journalism strengthens democracy. Invest in the future today. Thereafter you will be billed R75 per month. You can cancel anytime and if you cancel within 14 days you won't be billed.
Subscribe to News24
Next on Life
Santa Cruz's most influential MTB frame can now carry snacks – safely