Hans Becking and José Dias of Buff Scott MTB claimed another stage victory at the 2021 Absa Cape Epic, following up their Stage 4 triumph with an equally impressive display to claim the 84km Stage 5 in Wellington.

A beaming José Dias put the performance down to the Buff Scott MTB partnership. "We have such a good connection on this race," said Dias. "We just look at each other and we know what to do. We still had good legs after yesterday, but we were pushing the limit all the way today. It’s an amazing feeling to win a second stage." There was a threat of heavy rain during Stage 5 of the Absa Cape Epic, and the men started their race like none of them wanted to get caught in the downpour. The rain never truly materialised, but that didn’t translate into a let-up of the pace; it was fierce from the first second.

First, Urs Huber (BULLS) pulled to the front, then Lachlan Morton (EF Education-Nippo) found himself leading the bunch. BULLS 2 were the next to attack, followed by a surge from Trek-Pirelli (Samuele Porro and Fabian Rabensteiner).

The final 10km was a flat, fast sprint through the vineyards, with Buff Scott MTB having plenty of energy to extend their lead to around a minute-and-a-half. They duly crossed the line for an exceptional Stage 5 win. BULLS 2 rolled in for second place, Beers and Sarrou right with them for third. 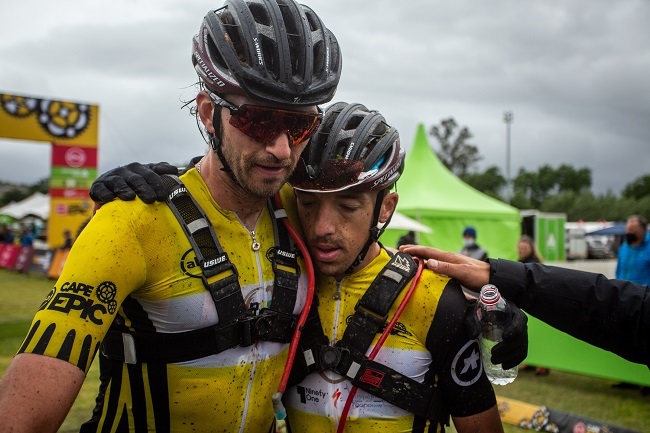 An SA win could still happen

Matt Beers and Jordan Sarrou (NinetyOne-songo-Specialized) remain the overall leaders in the yellow leader jerseys, with a 00:06:39 lead over BULLS 2.

"Buff Scott was just in a league of their own today," said Beers. "We just tried to conserve energy today for another big ride on Saturday. BULLS 2 are the closest to us on the overall standings, so I think the next few days will be cautious, and we will look to mark them to make sure they don’t get away."

Laura Stigger and Sina Frei (NinetyOne-songo-Specialized) continued their incredible run of form at the 2021 Absa Cape Epic in Wellington today, winning their sixth stage (one Prologue and five stages). NinetyOne-songo-Specialized have a huge lead in the women's category (Photo: Sam Clark)
Ride24

No catching the lead women's team

For Stigger and Frei, who now enjoy a 29-minute lead over their nearest rivals in the overall standings, it was a chance to ride and enjoy some of South Africa’s best trails.

The top three women’s teams stayed together for half of the stage, with NinetyOne-songo-Specialized and Faces CST eventually pulling away from Salusmed around the 45km mark.

Light rain throughout the morning had made the trails slightly muddy, but that was of little concern to the winners-in-waiting. "We race so much in the mud in Europe," said Frei.

"This was a bit muddy but it’s not like we have seen overseas this season. Tomorrow could be worse, but today was super fun. We really enjoyed the ride and all the trails today - the downhills were excellent and really enjoyable."

Stage 6 is a loop around the mountains surrounding Wellington. The high peaks will trigger any rain from passing cloud cover, and trails are expected to be wet.

The 90km route features 2300m of climbing and some of the best technical trail riding, on the Cape Epic.