Andreas Seewald has been threatening to show his World Champion credentials all week. It finally came to be on stage 3, as he and Martin Stošek powered to a vital stage win.

The Canyon Northwave MTB pair remain in second overall, but they have cut the lead of NinetyOne-songo-Specialized’s Matt Beers and Jordan Sarrou down to 01:43.

"Our plan worked perfectly today," said Seewald. "We controlled the pace on the long singletrack section from the front and could afford to take it a little bit easy - this was good because we didn’t know the trail that well. Then on the steep climb, we attacked." 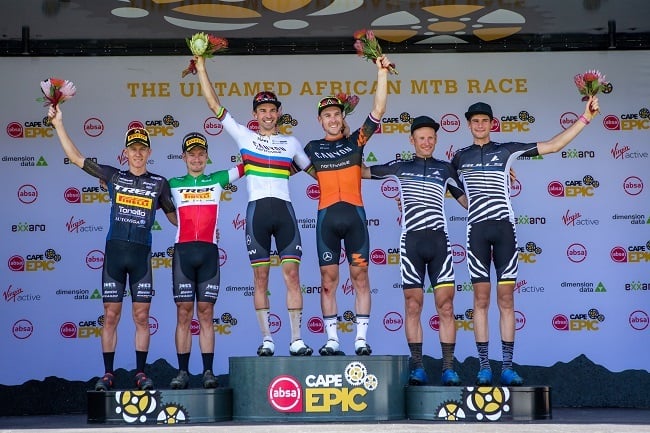 Samuele Porro and Fabian Rabensteiner (Trek-Pirelli) managed to stick with Seewald and Stošek on the climb, with all four riders racing towards the finish on the final, flattish last 10km. "We had worked hard on the climb," said Seewald. "Towards the finish, we had Trek-Pirelli with us so we could all work together and get over the line as quickly as possible." Riders had the chance, to get some air, on the more technical downhill sections (Photo: Nick Muzik)
Ride24

A tough day for the overall leaders

Urs Huber and Simon Schneller of BULLS were able to finish third on the day, with BULLS 2’s Martin Frey and Simon Stiebjahn (fourth) riding home just ahead of yellow jersey wearers, Beers and Sarrou.

Temperatures peaked at 37-degrees Celsius in Tulbagh, testing riders to the limit.

At the finish, Sarrou lay in a crumpled heap. "I’m feeling so exhausted," he said. "It was a hard day. We had to climb that huge hill in the heat. It was so steep; just incredibly hard, but we managed to bring the gap back a little bit after they broke away." Nice views, but the heat on the trails, bordered on the extreme (Photo: Nick Muzik)
Ride24

The need to carry more water - was real

Sporting a hydration pack for the first time at an event, Sarrou’s partner Beers was happy with his foresight. "I don’t even have a hydration pack," said Beers. Alan Hatherly organised it for me last night; he took it to my dad at around 21:00, then my dad brought it through to me this morning. I’m glad I did it."

They conquered everything Stage 3 could throw at them - the Dimension Data Hotspot Sprint on Tulbagh’s 300-year-old Church Street, the race to the top of the climbs, and the race to the bottom of the descents.

On their Specialized Epics, they finished the stage nearly four minutes ahead of their nearest rivals, Robyn de Groot and Ariane Lüthi (Salusmed), giving themselves a mammoth 11-minute lead in the women’s race general classification.

Stage 4 of the Cape Epic will take the riders from Saronsberg (Tulbagh) to a rearranged finish at Goudini Spa in the Slanghoek Valley.

At only 73km, the ride may seem short, but with punchy climbs and rocky terrain on the route, the race will certainly take a few more twists and turns.