Riding the Cape Epic after a heart attack 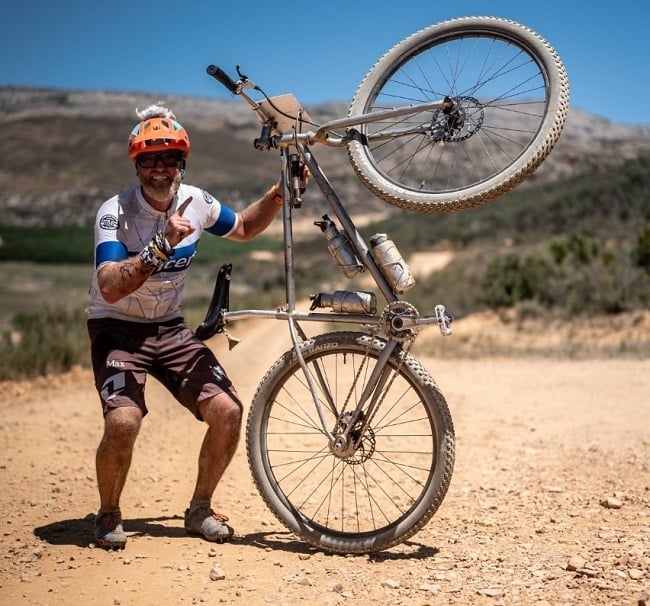 Max Menzies is the kind of person that likes to make voluntarily difficult things, even more challenging.

He has finished four Cape Epics on a single speed mountain bike. During his fifth attempt in 2018 he had a heart attack during the prologue on Table Mountain. Nonetheless, he is back for more.

Almost dying while riding your bike would be enough to pack it up and take up a less strenuous hobby for most people. For Menzies, it was an opportunity to come back stronger, challenge himself even further, and help others while doing so.

Menzies is back for the doubleheader and plans to ride the Cape Epic in October this year and in March 2022 on a single speed, alongside a teammate from the McGregor Young Warriors & Angels mountain bike academy.

Ride24 sat down with Menzies to chat about cycling, comebacks and finding Zen in McGregor.

Tell us about the events leading up to your near-fatal heart attack?

I was in good health, making healthy lifestyle decisions and didn't see it coming. Endurance athletes who like to compete in these endurance events think we are indestructible. But we are not.

I had finished the Munga in December the year before and it took a lot out of me. I did Munga on a steel single speed and rode for 119 hours, finishing just 20 minutes before the cut-off. My form never came back from that. I never felt great.

Going up Dead Man's tree during the prologue, I felt a spike in my chest and then again while sipping on an espresso at UCT. I put it down to the intensity of the riding and the caffeine.

Unfortunately, while driving to Arabella for Stage 1, things took a turn for the worst. I started sweating, feeling nauseous and struggled to breathe. We called a mate who is a doctor and he immediately diagnosed it as a heart attack.

I was rushed to Worcester hospital, where they confirmed this. I had a stemi, a blockage in one of the main arteries and am very lucky to have survived, given the circumstances.

You have done most of the events in South Africa, what is it about Epic that keeps you coming back?

The Cape Epic is certainly an event that keeps pulling you back. It is an event like no other. You feel like a rock star for a week after finishing, no matter where in the field you placed.

Immediately after my heart attack, I wasn't sure I would be back. Having a heart attack was a serious setback, so serious that I even bought a bike with gears. But I was back on my single speed as soon as I was given the all clear to push my heart rate again.

The youngsters in the village of McGregor motivated me. Coming from having nothing, these kids know about suffering. I am learning just as much from them as they are learning from me.

What are your expectations from the Cape Epic this year?

Riding Epic in October will be interesting for sure. The weather will be different with more chances of rain. The field will also be smaller with only 250 teams. I think it will be unusual with everyone in the bubble for a week.

I have never done Epic and stayed in the tents before, but this year it is mandatory, so we will get the 'full' experience in that regard.

I don't think I am the fittest I have ever been, but I am certainly healthier. I am also more nervous this time around and am putting more pressure on myself. It will be my first Epic since my heart attack. I am also older now and I can feel it more on the bike.

Although my partner is tough as nails, I will also be guiding him through the event and making sure that he looks after himself in terms of pacing and nutrition.