A rider who loves crushing huge distances. On his own. (Photo: Oliver Grenaa)

Some of the most influential and popular pro riders, don’t win the big events.

Jens Voight was a crowd favourite, for his audacious attacks and ability to suffer alone. Peter Sagan is inarguably the biggest name in road cycling, but he’ll probably never win a Tour de France.

Morton even starred in the acclaimed 2014 documentary, Thereabouts, with his brother Gus. It chronicled their cycling careers, in an epic 2500km ride to nowhere, through rural Australia. 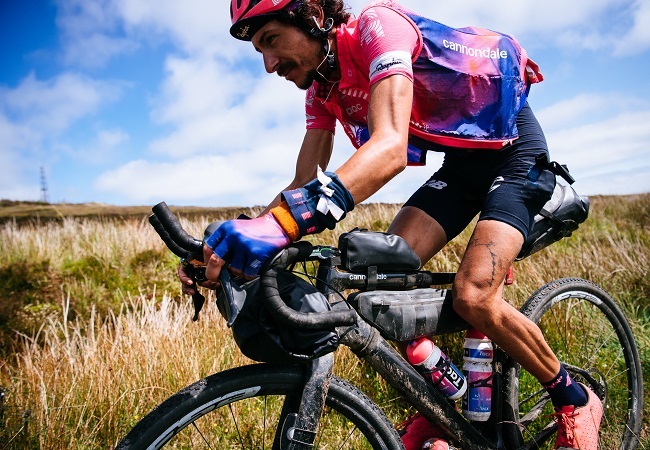 Paying respect to the greatest race - for a good cause

Lachlan Morton is a rider who does things very differently. And one who has the blessing of his team (EF education-Nippo), to embark on solo rides that don’t carry UCI points or prize money.

Morton has transitioned into making a career of his Alternative Calendar rides, going to different global locations and riding challenging segments.

His latest project is extraordinary in its scope and ambition. Morton will ride an approximate replica of the original 1903 Tour de France route. Alone. No team car. No teammates to tow him along in their slipstream. No bike mechanic to service his components, at night.

The idea is to ride a Tour de France route, including all its vehicle transfers, which nearly doubles the distance. No teammates to shield him. And a bike loaded with touring gear. Morton will not be riding light (Photo: Oliver Grenaa)
Supplied

A scary collection of stats

Unpacking the numbers of Morton’s Alt Tour ride, you realise the cycling courage he has. Tour de France competitors will race 3383km. He will ride 5110km.

Total elevation for the peloton calculates to 42 200m for this year’s Tour de France. Morton will be climbing 65 500m, the equivalent of seven Mount Everest ascents.

It is an astounding challenge. Morton hopes to ride for 23 days, without a recovery break. He hopes to beat the Tour de France peloton to Paris.

The Alt Tour is not an expression of ego. Morton’s pro team will donate 500 bicycles to World Bicycle Relief, a non-profit that aims to alleviate poverty by enabling greater human-powered bike mobility. Another 500 bikes will be sponsored by apparel brand, Rapha. Extreme rides are what Morton loves. And this Alt Tour, has a worthy goal (Photo: Grubers)
Supplied
We live in a world where facts and fiction get blurred
In times of uncertainty you need journalism you can trust. For 14 free days, you can have access to a world of in-depth analyses, investigative journalism, top opinions and a range of features. Journalism strengthens democracy. Invest in the future today. Thereafter you will be billed R75 per month. You can cancel anytime and if you cancel within 14 days you won't be billed.
Subscribe to News24
Next on Life
Instagram data science ranks the world’s most picturesque cycling routes