The United Arab Emirates (UAE) is not a traditional cycling destination.

Deserts are harsh riding environments and sand can be brutal on bicycle components.

Despite these challenges, cycling has grown impressively in the UAE. There are professional road races and a burgeoning rider culture.

A significant milestone for UAE cycling has been the emergence of Safiya Al Sayegh. The 20-year old former mountain biker turned road racer has become the first Emirati woman to join a World Tour pro team. Showing the way for UAE women - on bikes

Safiya will be riding for UAE Team ADQ this season, as its only Emirati representative. She is the reigning UAE road and time trial champion.

Bringing a Hijab into the peloton, Safiya is aware of expectations. Among the pressure of being a pro rider and graphic design student, Safiya will also be a trailblazer for Muslim women in cycle sports.

As part of a World Tour team, Safiya will spend some of the mid-season racing in Europe, where she has limited experience. 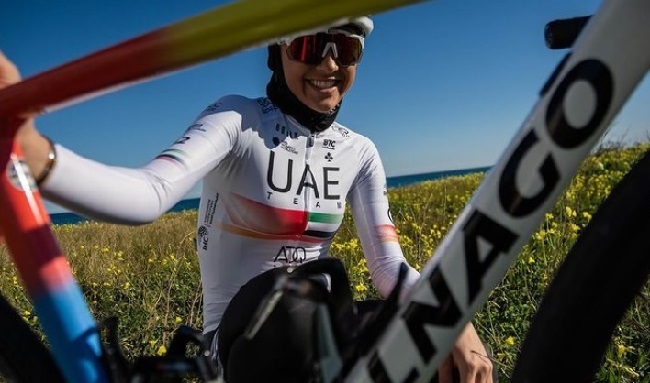 Safiya is thrilled to be on a Colnago bike, for her debut European pro season. (Photo: UAE Team ADQ)
Ride24

Changing her riding style, from UAE to Europe

Terrain and weather differences between Europe and the UAE, are immense. Although the UAE does have mountainous terrain with excellent roads, allowing riders to train for Alpine mountain stages, there aren’t cobbles. Or narrow, winding descents.

Roads in the UAE are wide, with a very generous riding shoulder. And there are miles of protected bike paths. The Jabal Hafeet mountain road, which climbs to 1219m over 11.7km, is perhaps the UAE route most similar to famed European mountain passes.

Safiya will have to adapt to the rougher road surfaces of European races, with their notorious cobbles. And high-speed technical descending is a feature of racing in France and Spain.

And Safiya’s bike for the season? Nothing less than Italy’s best – the Colnago V3R.