The spirited Brazilian crowd and exotic jungle track, made for a memorable first round of this season's UCI XCO World Cup series.

With the world's best sprint mountain bikers having no previous experience of the Petrópolis track, the amazing jungle setting was open to new race strategies – relating to humidity and hydration tactics.

Although the Petrópolis venue lacked abundant roots or natural rock gardens, riders had many other issues to conquer. Brazil's thick jungle, humid conditions and prominent technical features made for a challenging track. Wins for SA and OZ

The women's race was a first UCI World Cup win for Australia's Rebecca McConnell. Race favourite and reigning Olympic gold medallist, Switzerland's Jolanda Neff, did not start due to illness.

As teammate to Brazilian mountain biking superstar and the Petrópolis track designer Henrique Avancini, Hatherly was among the leading men's bunch from the first moment of the seven-lap main race.

The pressure on Avancini was immense. He worked tirelessly to ensure the venue recovered to a standard that could host a UCI World Cup event, after Petrópolis experienced tragic flooding in February. 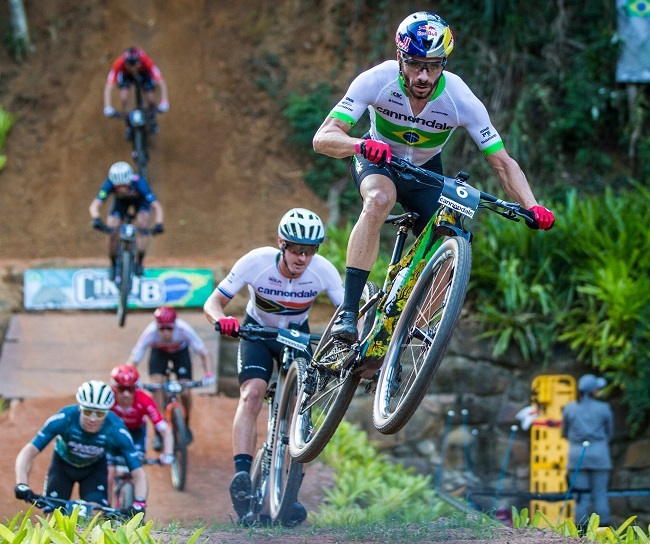 From the Cape Epic - to the jungle

After a disappointing Cape Epic experience, where he suffered multiple punctures, Schurter was determined to show why he is considered the greatest XCO mountain biker of his generation. The Petrópolis track had many technical features. And KZN’s Alan Hatherly had the skills to conquer all of them. (Photo: Red Bull Content Pool)
Ride24

Despite being considered one of the most skilled technical riders, Schurter avoided the Petrópolis main rock garden during the first few laps of the race, opting for the B-line, to avoid any tyre risk.

Hatherly took the lead on lap three but surrendered it to France's Maxime Marotte on lap four. Sunlight streamed through the forest during the men's race, drying the track, but also surging temperatures and humidity. Not a great day for Brazil's hero

Halfway through lap four, the lead riders started encountering backmarkers, and Marotte upped the pace, especially on the track's most flowing descents. Schurter briefly retook the lead before Romania's Vlad Dascalu powered to the front, in lap five.

Destiny was not to favour Brazil's best rider. Absorbing the frantic Brazilian crowd's energy, Avancini left nothing out on the Petrópolis track. But it was not to be. Despite being adapted to the local humidity and possessing intimate knowledge of the track, Avancini finished a disappointing 13th.

The jungle climate also appeared to sap Hatherly's energy as he faded in the last two laps, but still ended in an entirely credible ninth. It was an excellent weekend for the young South African and his status as an elite racer is now complete. For Switzerland’s best, it was a very happy first outing, in the Brazilian jungle. (Red Bull Content Pool/Bartek Wolinski)
Ride24

Close as a race finish can be

Despite Marotte’s best effort, Schurter rode a masterful final lap, outsprinting his younger rivals to the line. Marotte finished second and Dascalu third. The margin between first and second place, was less than a second.

Schurter’s victory also equalled the all-time win record (33) of France's Julien Absalon, something the Swiss rider had been waiting three years to achieve, making the win an emotional one. His tears on the podium were evidence of that. 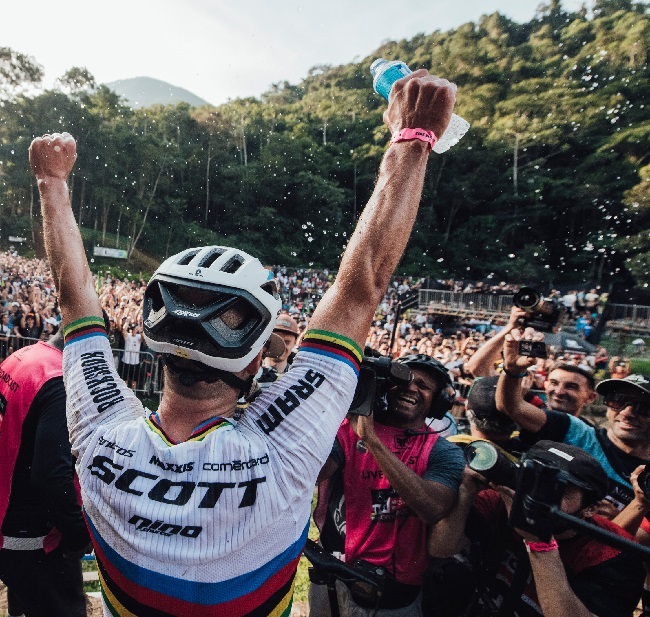 After a frustrating Cape Epic campaign, Schurter's win in Brazil reinforces his reputation as the best world's XCO mountain biker.

The UCI World Cup series now moves to Europe, with round two schedule for 6 May, in Albstadt (Germany).

With his short track win and top ten finish in the main race, Alan Hatherly leaves Brazil with an impressive ranking of third overall, in the UCI World Cup standings.