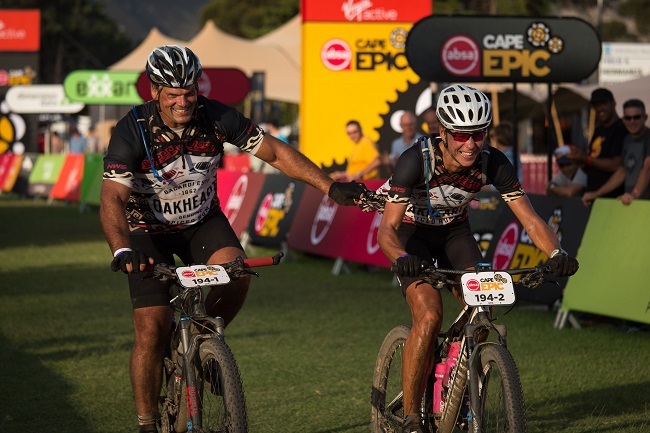 Adele Niemand played more than 80 netball internationals for the Proteas, including two Commonwealth Games, before retiring in 2016.

Niemand now gets that dopamine fix behind the bars of her mountain bike. For the 18th Cape Epic, she is once again riding with Marius Hurter, as team Team Difflock & Stofstreep.

"I was invited by a friend to do the Cape Epic, which led to me rolling onto the start line in 2017. While playing Netball, I had always wanted to participate in endurance events as I always thought it would be a good sport."

"The Cape Epic seemed like the kind of challenge that I wanted to undertake and I have finished three so far."

During that first Cape Epic in 2017, an unfortunate mechanical led to an unlikely but rewarding partnership.

"In 2017 I buckled my wheel near Hermanus. Marius Hurter helped me get it straight enough to get to the next water point and finish the day."

"We bumped into each other at events around the Western Cape, and then in 2019 he invited me to ride with him a month before the event. I had been training for Ironman, so the fitness was there," says Niemand.

Marius Hurter, a legend of the 1995 Rugby World Cup is a regular Cape Epic campaigner with eight finishes. Hurter is known for getting great value for money on Epic stages – riding many more hours than most of the field.

Tighthead props don’t have the ideal build for an endurance mountain bike event. But Hurter is always willing to help Cape Epic stragglers with pep talks, a sturdy push, or simply keeping them company at the back of the field.

Niemand benefits from the Springbok rugby legend's riding experience. "Marius has loads of experience and knows how to time the stages and when to push hard. Many riders start too quickly but then start struggling come stage four or five. Consistency is key to finishing the Cape Epic, even though we cut it close at times."

In the history of the Cape Epic, many Springbok rugby and Protea cricket players have completed this race. However, Niemand is one of the only women who has transitioned from international team sports to mountain biking at this level.

"I think women need to realise that the Cape Epic is very doable. It requires a mindset change and the right training, but anyone can finish this race. I think the race is sold as a very tough event, and it certainly is challenging."

Niemand recognises the value of learning proper bike handling skills, in addition to the fitness training required for an Epic. "If ladies are upskilled in their bike handling skills and are comfortable on trails, nothing is stopping them from doing the Cape Epic. Many women have proven that."