Overcast conditions made for a pleasant start to the Tankwa Trek. (Photo by Ewald Sadie/Shift Media Co.)
Ride24

The Tankwa Trek’s first stage experienced unexpectedly mild to cool weather conditions. After a scorching January in the Western Cape, which included a dramatic Attakwas race, riders were grateful for the lower temperatures.

With teammate Fillipo Colombo in tow, nine-time UCI XCO World Champion, Schurter, applied all his racing nous and formidable power to ensure victory on the opening stage. Mariske Strauss and Candice Lill got their title defence off to a winning start in the women's race. A big crash for the early leader

The punchy route, which featured a mix of rocky singletracks, rugged dual tracks and a couple of gravel road drags ensured a frenetic first stage.

Jaco Venter and Sascha Webber set the early tempo, as they led through the first few kilometres. Sadly, Venter’s race ended prematurely in the stage's first singletrack section. The Trek-Vaude rider’s front wheel collided with a small antelope, possibly a steenbok (Raphicerus campestris), which ran across his path.

Venter was brought down at high speed, cartwheeling dramatically over the bars. He was unable to complete the stage as a result. Somehow the other riders, who were following close behind, were unaffected by the crash and the racing continued.

Simon Andreassen was the next aggressor; but Schurter and Colombo came to the fore. Their charge through the stage was briefly interrupted by a slow puncture to Schurter’s front wheel. After stopping to reinflate the tyre, the Corner Card team managed to regain contact with the lead group inside the final 10km. 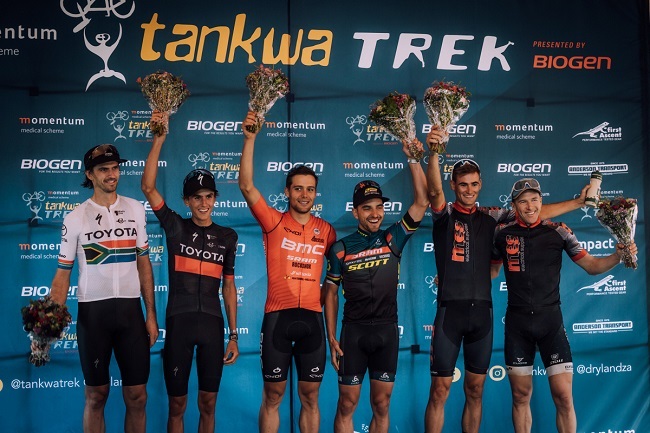 Very close racing at the finish

Schurter led Colombo into the final singletrack, benefitting from a tangle behind them. Sprinting for the entrance to the fields, where the finish line was located, Matt Beers and Konny Looser came together.

Looser had to stop as he ran out of space, with Beers losing traction and control in a sandy patch. Despite the MES Electrical Supplies team’s other rider – Alexander Miller – crossing the line just behind Schurter and Colombo, Looser’s halt within the final 20om relegated them to third.

"It was a fast stage with very tight racing," Schurter commented. "We didn’t really know where the singletracks were so we had to stay near the front all the time. I had a small leak in my front tyre, but fortunately that didn’t cost us too much." It is going to be a great weekend of racing

In the women’s race Lill and Strauss’ margin of victory was a commanding 05:42. Sarah Hill and Theresa Ralph won the sprint for second over the Efficient Insure Infiniti Racing riders.

The tight gaps between the top men and the negligible difference between the second- and third-women’s teams bode well for an exciting weekend of racing.

The Tankwa Trek’s second stage is often underestimated for its difficulty. This 86km route, through the Witzenberg Valley, takes in 1900m of climbing.

And is run in reverse this year, as opposed to its usual orientation.