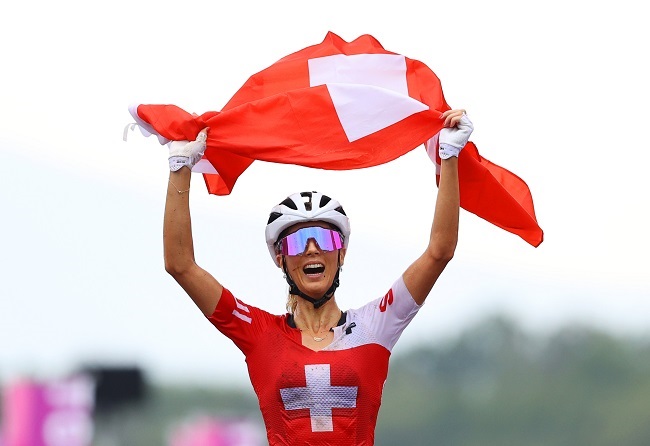 The most dominant performance in Olympic mountain bike history has been delivered by Switzerland, in Tokyo.

Expectations are always high when Swiss mountain bikers are involved, but nobody could have predicted how comprehensively the Swiss would sweep Tokyo’s women’s event.

In contrast to the dusty men’s event, overnight rain had turned the course muddier, making it a lot more challenging for the women’s group. Riders had to decide on tyre choice, potentially opting for grippier rubber in the muddy conditions, and thereby sacrificing some rolling speed.

In the end, it all played into the hand of Switzerland’s Jolanda Neff, and two of her teammates. Neff was a favourite.

As a multiple mountain biking World Champion, Jolanda Neff’s ability is beyond doubt. She also excels on technical tracks, showing great skill and courage, on the descents.

Neff controlled the race pace and took gold from fellow Swiss, Sina Frei, whilst Linda Indergand took bronze. It was an all-Swiss podium, symbolizing how potent the small European nation is, at mountain biking.

For Neff, the Olympic gold is a deep personal triumph. Her career was nearly ended, after a huge crash during a trail ride in December 2019. Neff was riding a technical high-speed trail in North Carolina, when she crashed and suffered a ruptured spleen, fractured rib, and collapsed lung.

After recovering strongly in 2020, she broke her hand at the Leogang World Cup event, in Austria, during the second weekend of June. Taking Olympic gold only five weeks later is a testament to her resilience and character.