Tanqua Kuru is harsh gravel bike hedonism in the Tankwa South Africa’s longest dirt road is the R355. And it routes from Ceres to Calvinia. Very much through the splendid desolation of the Tankwa Karoo.

It’s a destination for travellers and revellers. Popular with weekend off-road motorcyclists and those who want to recharge, in a setting that provides a crushing abundance of silence. Afrika Burn is the event most associated with Tankwa.

Open terrain, negligible vehicular traffic and a treasure of dirt paths. This area has the making of an exceptional gravel bike venue. And that’s why the nearly eponymous Tanqua Kuru gravel bike event, came into being last year. The addition of a mountain bike category, has seen more riders give the Tanqua Kuru a go. (Photo: @retroyspective)
Ride24

The second edition saw a slight change in equipment requirements – with mountain bikes being allowed. This opened the opportunity for riders who might have the fitness, but lack the hand, wrist and forearm robustness, to ride corrugated gravel roads on a rigid bike.

Although the total distance might not sound particularly challenging, the Tanqua Kuru’s riding statistics proved deceiving. There’s nowhere to hide in the Tankwa. If a headwind commences, you simply need to grind through it. (Photo: @retroyspective)
Ride24

The Tankwa Karoo is harsh. This is an unforgiving environment with raw dirt trails. And very few free ‘miles’. Even on flatter sections of the route, surface changes were draining.

Anyone familiar with the deep Karoo will know how agonising it can be to cycle across harsh corrugations. And the Tankwa Karoo does not lack for severely corrugated road surfaces.

And then there’s the sand, which immediately saps energy reserves. But nothing is quite as testing as a Tankwa Karoo wind. Riders at the Tanqua Kuru had to contend with strong wind during the event. Most think the Tankwa is all about gravel riding. But there is rocky terrain through the river crossings. (Photo: @retroyspective)
Ride24

Gravel bikes have evolved apace as more people embrace this lightweight all-terrain riding category. And the most significant upgrade gravel bikes have benefitted from are larger tyres.

Many gravel bikes are now running tyre widths and volumes that would have been appropriate for cross-country mountain biking in the late 2000s.

Larger tyres, with more air volume, allow much better bump absorption. And at an event like the Tanqua Kuru, where corrugations and bumpy dirt roads are a given, riders on wider tyres, suffered much less hand, arm and shoulder fatigue. An image to convey the scale, of the Tankwa. Rider is bottom right. (Photo: @retroyspective)
Ride24

Tanqua Kuru organiser, Jeremy Crowder, respects the environment. "Riders often underestimate the harshness of the Tankwa Karoo, while there is almost no climbing, there are no free miles, it caught many riders off guard."

The men’s race saw a win for Julian Robinet, followed by Pieter Calitz and Schalk Blom. 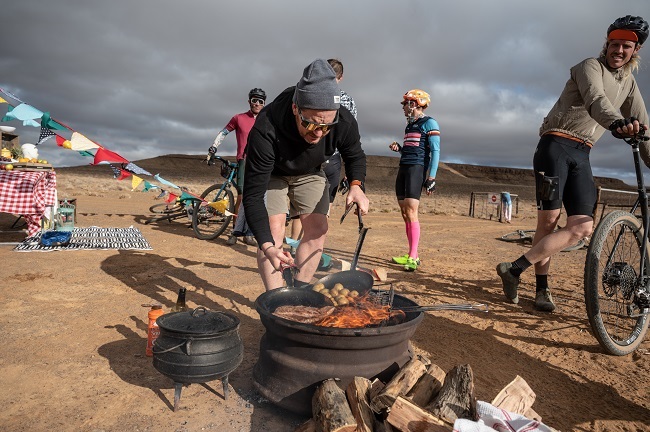 The Tanqua Kuru does not believe in conventional refreshment points. Only proper Karoo riding fuel is provided. (Photo: @retroyspective)
Ride24

Easy life, off the bike

For most Tanqua Kuru riders, the event was a confluence of cycling and creativity. Being in one of the world’s most paradoxically harsh but inspiring environments.

The riding might be a challenge, but the living is not. Tanqua Kuru attendees had access to hot jacuzzies, ice-cold beers and excellent local cuisine.