Bicycle high jump? Should be an Olympic event. For sure (Photo: Satoshi Saijo)

With the Olympics focussing a great deal of attention upon Japan, one of its most talented bike riders has delivered something extraordinary.

Tomomi Nishikubo is a 29-year old Japanese trials rider, who desperately wanted to compete at the Olympics, but could not.

His speciality, trials riding, is not an official Olympic cycling discipline like mountain biking, road riding or track pursuit. Hurdles. Never easy. Even less so, on a bike (Photo: Satoshi Saijo)
Ride24

Showing respect for the pentathlon

Nishikubo was by no means discouraged and to show his enjoyment of the Olympics, as an event in his home country, the trials rider attempted a pentathlon. On his bike.

The combination of challenging athletics events, make the pentathlon tough enough. But attempting it on a bicycle is very ambitious.

"I've always been a huge fan of the major international sporting events and festivals. This video, my bike pentathlon, is my way of recognizing that. It is my homage to sport - with a wink." 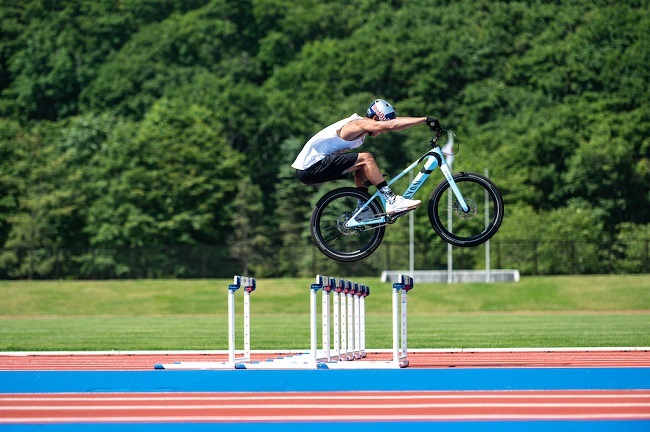 A very different approach to track and field

Known as the Ninja rider, Nishikubo tried the 110m hurdles, on his bike. The long jump. High jump. And even the 3000m steeplechase, which is a true heartbreak event, for most pentathletes.

Perhaps the only mildly ‘easy’ event, was his attempt at the traditional 100m sprint.