The unassuming cycling prodigy out for a Tour de France treble 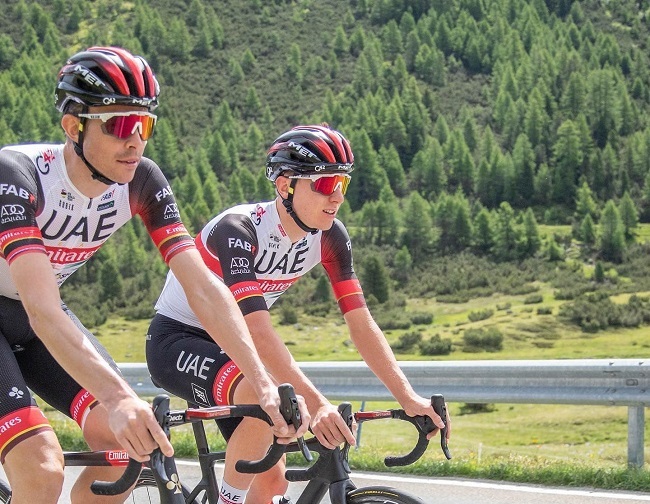 The youthful Slovenian might wear a mild expression and demeanour, but he can dominate the peloton. (Photo: UAE Team Emirates)
Cycling's understated superstar Tadej Pogacar will be hailed across Denmark, France, Belgium and Switzerland as the Tour de France covers its 3350km route between 1 and 24 July.

Beneath the Arc de Triomphe that day he could take the top step of the podium as the youngest ever triple winner, but he has already conquered the cycling world.

Off the bike, Pogacar is a smiling, polite and articulate 23-year-old who resembles the cartoon character Tintin, but who morphs into an enthralling winning machine once in the saddle.

Already on a superstar salary, after three stage wins on the 2021 Tour de France, Pogacar was fearless in the defence of his 2020 title, blowing away the old order.

It is easy to see why UAE Team Emirates made Pogacar the highest-paid cyclist in the world with a salary of close to R120m per year, putting him way ahead of the likes of Peter Sagan and Chris Froome.

Given the stage wins he has racked up on his three grand tours, three each on the 2019 Vuelta a Espana and two consecutive Tours, Pogacar clearly has the will to win, the panache to launch ruthless attacks, the talent to make those attacks count, and the willpower to carry them through to fruition.

In short he has a precious racing instinct that makes him dangerous once he's in the saddle. A third Tour de France win will make him one of the greats, at a remarkably young age. (Photo: UAE Team Emirates)
Ride24

Pogacar is one of four children from a small town 20km away from Ljubljana, his mother was a French teacher and his father an industrial designer.

The double Tour de France champion's elder brother Tilan initiated little 'Tamau' into cycling at age nine. He started on a bike that was too big for him, developing the handling skills that keep him in the saddle where others fall.

As a boy cycling with his brother, his heroes were the Schleck brothers, Andy and Frank, from Luxembourg. He cheered for Andy in the 2010 Tour de France, when the younger Schleck crossed the line second but was later declared winner when Alberto Contador was retrospectively banned.

He burst on to the scene at the Vuelta a Espana winning three stages, taking the young rider award and ending third on the podium in 2019.

Egan Bernal had won the Tour de France that year, paving the way for a new faster and aggressive generation. But Pogacar took up the baton in his unforgettable defeat of compatriot Primoz Roglic on the 20th stage of the 2020 Tour.

His face was then broadcast on the screens of the world's largest building, the Burj Khalifa. On Thursday he said he couldn't wait to get started on his title defence. Others wish he wasn't here

Jumbo co-captain's Roglic and Jonas Vingegaard spoke about surviving the first week ahead of the 2022 Tour. Pogacar was given the seal of approval from the man widely considered the greatest in the sport, the now 77-year-old Eddy Merckx, known as the 'Cannibal' because of his relentless hunger.

"Yes, maybe he is the new Cannibal," Merckx said during last year's Tour.

Four-time winner Froome named Pogacar as his favourite, saying "he isn't getting any slower is he?"

Geraint Thomas, the 2018 champion, said something similar. "It worked out quite well for him the last two years and he's trained the same way for this one."

Pogacar smiles when asked if fans can trust in him given the history of cycling.

"I believe I come from a good family, and they raised me to be a nice boy," Pogacar said last July. "I assure you, I'm not taking shortcuts in my life."