The 21-year old cycling phenom did what many expected he would in Tokyo.

In warm, humid and dusty conditions, that were completely unfamiliar to him, Pidcock showed that he is inarguably the next big thing in cycling.

The Tokyo Olympic race was billed as a contest between Pidcock and equally fancied Dutchman, Mathieu Van der Poel.

Despite starting in the fourth row, Pidcock swiftly overcame this disadvantage and powered to the head of the field.

Van der Poel looked strong but had a huge crash on the drop-off, which influenced his eventual retirement from the race. The Dutchman keep riding after his tumble, but was never really in contention again – and retried as a DNF.

Swiss mountain bike legend, Nino Shurter, spearheaded the lead group for a short while, but Pidcock was biding his time. He eventually powered ahead on a climb and nobody was able to catch him. 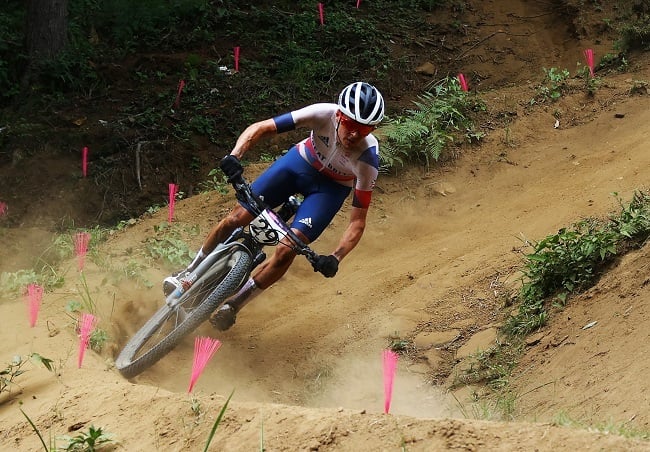 At only 50kg, Pidcock is one of the lightest riders in competitive mountain biking history. Small, but very potent. He has won everything you could imagine, at junior level.

In the end, Pidcock captured the mountain biking gold medal, by 20 seconds, ahead of Switzerland’s Mathias Flückiger. Some mountain bike fans will be disappointed that the Pidcock/Van der Poel battle did not last an entire race, but there is no questioning the young British rider’s dominance.

One of the great ironies of Pidcock’s participation in the Tokyo Olympics, and some other mountain bike events, is that he rides a ‘stealth’ bike.

As part of the lavishly funded Ineos Grenadiers road cycling team, Pidcock’s official team bikes are from Italy’s Pinarello. For mountain bike events, Pidcock uses an unmarked BMC frame, sourced from a Swiss cycling company – as Pinarello does not make a mountain bike of its own, anymore.