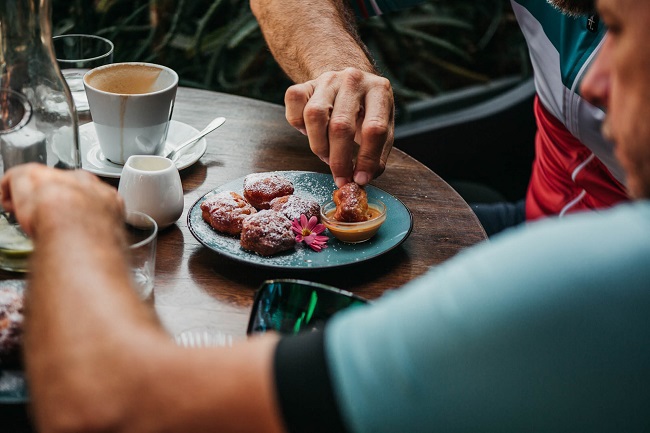 Our suggestion for a steep climbing route in the capital, and where to get coffee and carbs, afterwards. (Photo: Sané Louw)

Tom Jenkins drive, one of the steepest climbs in Pretoria, is situated on the back of Meintjieskop, the hill in Pretoria on which the Union Buildings is located.

All the access roads to the Union Buildings, including the Government avenue switchbacks and Edmund Street, offer cyclists a climbing challenge. But Tom Jenkins towers over the rest while offering magnificent views of the Magaliesburg to the north.

This climb might be relatively short at 900m but with an average gradient of 9% and sections as steep as 14%, it is sure to get the heart rate going and the legs burning. It is here that Daryl Impey attacked to win the 2019 SA road cycling championships.

The summit of the climb is adjacent to, Mahlamba Ndlopfu (previously known as Libertas), the official residence of the President of the Republic of South Africa. Down the road from the famous Union Buildings in Pretoria is a new coffee spot worth checking out. (Photo: Sané Louw)

Earning that coffee – and those carbs

After summiting Tom Jenkins, riders can roll east down the leafy Government avenue, to Church street, and cruise past the Presidential Golf course. Ease onto the brakes for that anticipated coffee fix and turn into Colbyn Village, a lovely neighbourhood corner spot with a bunch of quaint establishments.

A recent addition to the newly revamped Colbyn Village, is Trixie’s café. Colbyn Village has been part of Pretoria’s eat out culture for many years, thanks to famous tenants past and present such as the Milky Cove Roadhouse and the Royal Danish Ice Cream Parlour.

Trixie’s is fast becoming a favourite among cyclists whether that is after a club ride from Bruce’s down the road, looking for vert around the Union Buildings or returning from a loop around the Roodeplaat Dam.

The coffee menu is extensive and pairs fantastically with a plate or two of Beignets for the table.

A Beignet is a deep-fried pastry similar to a vetkoek but smaller in size. At Trixie’s they are drizzled in icing sugar and served with a salted caramel sauce. Just the right amount of carbs and sugar make it the perfect 'get-me-home' snack.

In addition to coffee and the aforementioned deep-fried goodness, the menu at Trixie’s offers breakfast, light lunches, milkshakes and an array of delicious cakes.

Trixie’s Café is situated in Colbyn Village at the corner of Thompson and Duncan Streets, Pretoria.

We live in a world where facts and fiction get blurred
In times of uncertainty you need journalism you can trust. For 14 free days, you can have access to a world of in-depth analyses, investigative journalism, top opinions and a range of features. Journalism strengthens democracy. Invest in the future today. Thereafter you will be billed R75 per month. You can cancel anytime and if you cancel within 14 days you won't be billed.
Subscribe to News24
Related Links
Routes to ride: The Winelands’ four passes
The Dairy Shed: Where bikes and coffee meet
Next on Life
Ciovita reveals CTCT 2023 range with abstract Table Mountain design theme