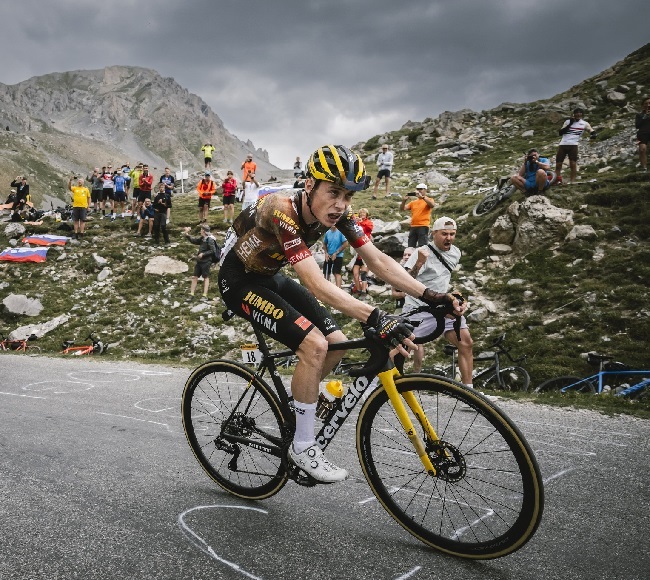 Jonas Vingegaard climbed into the Tour de France overall lead in a mountain stage win for the ages on Wednesday, as defending champion Tadej Pogacar wilted in the sizzling heat and cracked with the soaring heights.

On the day, the Dane finished nearly a minute ahead of Colombian climber Nairo Quintana, who predicted just this kind of shake up earlier this week.

Frenchman Romain Bardet was third, 11sec further back at the 2413m altitude summit finish, and appears to have the form to make a deep run.

An exhausted Pogacar looked broken as he crossed the line seventh, 2min 51sec adrift at the summit of the 9.2%, 11.5km ascent of the Col du Granon in the southern Alps. Too hot for the defending champ

Pogacar had the class to fist-bump Vingegaard at the finish line and was also big enough to face the media immediately.

Pogacar lost two teammates to Covid-19 this week and is known to dislike racing in great heat. With the temperatures hitting 30-degrees Celsius, Pogacar dropped from first to third in the overall standings at 2min 22sec.

The 23-year-old looked fine even half way up the final challenge and was even smiling when the pretenders regrouped briefly. Vingegaard now leads Team DSM's Bardet by 2min 16sec in the new look standings after he also soared on a tough, baking day.

Looking pale himself, Vingegaard expressed surprise at the extent of his triumph. "Tadej is an enormous rider, to take the yellow off him like this is unthinkable," said Vingegaard.

He also hinted Thursday's proceedings could provide further drama. "It's looking good for the upcoming stages, the plan was always to pile on the pressure on these two days," the 25-year-old added.

"But I'm stunned by this lead, at 3km I began hurting and at two the only thing I could think about was finishing." It was a first ever Tour stage win for Vingegaard, who finished runner-up behind Pogacar in 2021. His teammate Primoz Roglic, a three-time Vuelta a Espana winner, had provided a support in the attacks before he cracked on the last hill.

Another Jumbo-Visma man Wout van Aert began the demolition job by setting a swift early pace. "My team were amazing, above all Primoz, he gave everything, what a generous, amazing guy," Vingegaard said. Ineos remain in the hunt

Geraint Thomas, the 2018 Tour de France champion, and his fellow Ineos rider Adam Yates also overtook Pogacar in the finale. The Welshman is fourth in the overall standings just four seconds off the Slovenian while Quintana is fifth.

To witness this epic stage there were camper vans galore, flaming barbecues and countless amateur cyclists who had taken on the legendary ascent in the morning.

They were often running alongside the riders after having gathered here for days to give the action-packed stage the audience it deserved.

While the Alps and the valleys below provided a stunning panorama for a magnificent stage.

Thursday's stage on France's 14 July national holiday may provide a similar shake up and is billed as the Tour's toughest ending on the Alpe d'Huez climb, known for partying fans and champion performances.