The Danish Tour de France champion is part fo a new-generation of pro riders, who can climb, sprint and do it all. (Photo: A.S.O/Charly Lopez, Pauline Ballet, Jered & Ashley Gruber)

Paris, 24 July, 2022 (AFP) -Jonas Vingegaard rode into Paris on Sunday to be officially crowned the 2022 Tour de France champion after three weeks and 3 350km of relentless struggle up peaks, over plains and through a crushing heatwave.

Jonas Vingegaard's girlfriend and daughter acknowledged him, as the Dane crossed the Tour de France finish line to deliver a famous victory. Vingegaard proved his credentials in the Alps, where he wrested the lead from last year’s Tour de France winner, Tadej Pogacar.

The 21st and final stage was a largely ceremonial run. It saw the remaining riders sip champagne as they breezed into the French capital.

Vingegaard's Jumbo teammates celebrated on Saturday night at their transit hotel at Limoges, and were in euphoric mood over breakfast, albeit ribbing their young champion.

"Is this the breakfast for a man who has just won the Tour?," quipped one of his teammates. Vingegaard insisted he was feeling "better than ever" ahead of Sunday's coronation.

The peloton rolls past the Jardin de Luxembourg, through Saint Michel, over Pont Neuf and past the Louvre before a sprint over eight laps of the Champs Elysees.

A presentation ceremony beneath the Arc de Triomphe took place as the sun set on the 109th edition of the world's greatest bike race. Broadcast live in 60 nations.

The 25-year-old Vingegaard, who was runner-up in 2021 behind Pogacar, said he was already thinking about his 2023 challenge. 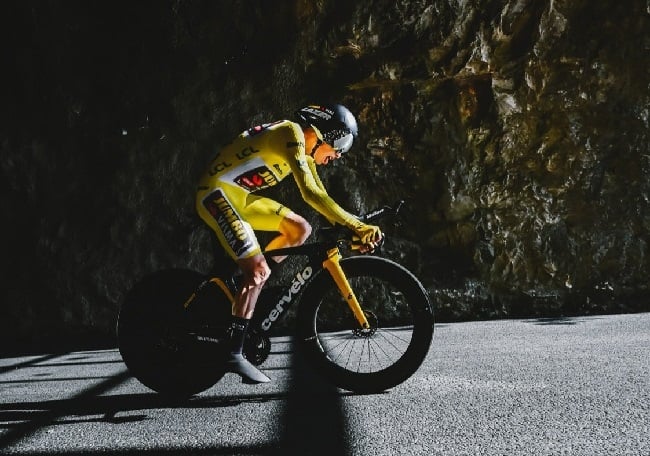 The Dane was eight seconds faster than his great rival on Saturday, and Pogacar looked downhearted at the finish line.

"I'm proud of myself, I did what I could, and at least I have the white jersey (best under-25s)," Pogacar said. "I learned a lot, I'll go away and analyse it."

Thomas will also be remembered for his under the radar approach that delivered a podium place at 36.

"I'm over the moon to be on the podium, people talk about age, but for me it's about mentality, if you eat, train, rest properly you can achieve a lot," said Thomas.

Just three weeks ago, a wall of sound accompanied Vingegaard as he set out on the Tour which started on home ground in Copenhagen.

Danish fans turned out in astonishing numbers as the race sped through the verdant Scandinavian nation, taking in a sensational crossing of the 20km long Great Belt Bridge.

On day three, local man Magnus Cort Nielsen was cheered all the way through Jutland.

Many stars emerged along the route with Belgian rider Wout van Aert, a Jumbo teammate of Vingegaard, coming third on all three opening stages then pulling off a late escape to finally land a win on stage four at Calais as the race returned to France.

Defending champion Pogacar made all the early running with his lone wolf mentality, gradually clawing into top spot on stage six.

But the stars aligned against Pogacar as he lost teammates to Covid and injury.

He is also a man known to dislike heat which was a major hurdle in the final week, as the Tour witnessed temperatures of over 40-degrees Celsius.

Vingegaard took the yellow jersey from Pogacar on stage 11 and while the UAE man refused stubbornly to give up, he lost further ground on stage 18. Their epic struggle was captioned by a touching moment of sportsmanship when Pogacar fell at high speed om stage 18, only for the champion-elect to wait for him to catch up in one of the race's iconic images.

Pogacar's last chance came in Saturday's 41km time-trial, but Vingegaard was too strong even if he almost came off his bike in what he described as a "heart attack" moment. He steadied himself to finish second behind van Aert and ensure his coronation in Paris. A great comeback for Meintjes

On stage 12, he finished in a very impressive second place. Meintjes was fully deserving of his lead rider status for the Intermarché–Wanty–Gobert Matériaux team, as he entered the top ten classification after stage 14, defending his position all the way to Paris.