Charlene, a mum of two and grandmother of one, had a throat cancer scare in 2011 which luckily turned out to be Hashimoto's disease - a condition where the immune system attacks the thyroid gland.

The momentary prospect of an early death meant that Charlene decided life was too short to be a slave to healthy eating and working out.

She spent the best part of seven years indulging in her favourite unhealthy food. 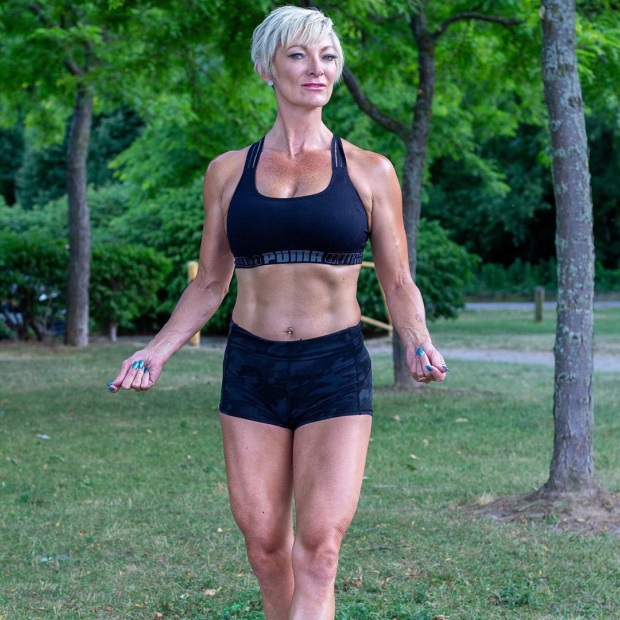 "This may sound strange, but after facing the possibility of early death, I went through a long phase of thinking why should I limit myself when I could just die suddenly anyway, but it caught up with me," she says. She bought herself a Fitbit and started doing weekly step competitions with her friends. Before long, she felt fitter than ever and decided to give bodybuilding a try, hiring a personal trainer.

This gave her level of fitness an extra boost and she started working out five to six days a week. When Charlene turned 50 in January this year, she felt she was in the shape of her life.

After sharing pictures of her incredible physique on Instagram and earning an impressive 19.7K followers on the social media platform, Charlene has started modelling. "I was never very confident. That is another perk of my health and fitness. I have great confidence now. When I was in my teens and early twenties - before I had my children - I did a bit of runway modelling. Then I didn't model again until I was forty-nine. That started with being asked to be in a fitness calendar."

READ MORE: Lizzo has adopted a vegan diet, and is enjoying green smoothies and garlic hummus for breakfast

"Getting positive messages from people wanting to know what I do to keep in shape or telling me that I inspire them makes me so happy. I love to tell others my story and let them know that it's never too late to start."

Charlene says, "My advice to others who want to start their fitness journey later in life is to speak with a dietitian. Get your eating habits on track. It all comes down to calories in versus calories out. Abs are made in the kitchen. Second, put yourself first. Make sure that your workouts are a priority. Once you get a workout routine going, it becomes a habit and before you know it, you'll be getting results that others will start to notice and you'll notice it as well."

What's your wellness routine? Tell us about it here.

We live in a world where facts and fiction get blurred
In times of uncertainty you need journalism you can trust. For 14 free days, you can have access to a world of in-depth analyses, investigative journalism, top opinions and a range of features. Journalism strengthens democracy. Invest in the future today. Thereafter you will be billed R75 per month. You can cancel anytime and if you cancel within 14 days you won't be billed.
Subscribe to News24
Related Links
Fearlessly pursue your fitness with these foods that help reduce inflammation in our bodies
Scarlett Johansson on body image - 'The pressure to be thin is getting worse'
Cardi B fires back at social media body-shamers after selfie photoshop claims
Next on Life
Paramedic shares why you should never put your fingers in a baby's mouth if they're choking