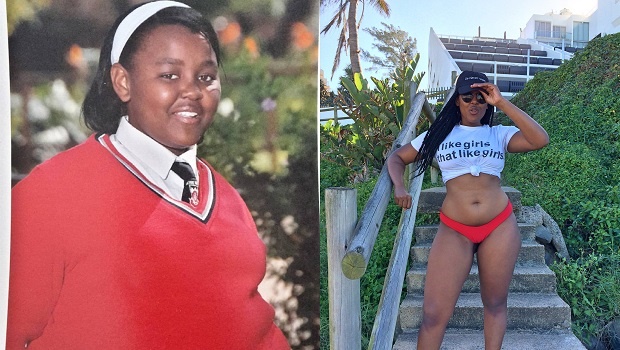 Growing up big is never easy, especially if you’re the biggest one in your friend circle. This is exactly how Malebo spent her childhood and teen years – overweight. But a visit to the dietician had her questioning the way she lived her life. Here’s how this young woman went from unfit and overweight to teaching others how to live a healthy lifestyle.

READ MORE: 8 embarrassing diet side effects we really need to start talking about

Secret weight-loss weapon: Work at your own pace

“I’ve always been bigger than everyone around me,” says Malebo. You become use to it – it becomes how you see yourself. “I never did anything about it. I kept on eating whatever was edible, so the weight kept increasing slowly every year, until it got to that 92kg.”

A typical breakfast consisted of three to four slices of white bread topped with processed meat and cheese, or her fave treat: freshly baked scones. On the lunch menu for lunch: a creamy pasta, or rice with meat from her supermarket deli counter. And when dinner rolled around, it would always include pap or more rice. And all of this would be washed down with a frizzy cool drink or juice.

Malebo was hitting the gym twice a week, but the exercise wasn’t having an effect. “You can’t out-train a bad diet,” she says.

In September 2013, Malebo visited a dietician. “I was desperate. I felt like I’d tried everything on the planet to lose weight, but the truth was: I tried everything except committing and being consistent.” She was shocked by the figure on the scale: “I was actually eight kilos away from 100kg!”

It would be another five months for Malebo to actually make a change, but she did it. She switched her usual white bread for rye and said goodbye to processed meats. Then she loaded up on good carbs: sweet potatoes, oats and whole-grain pasta. “I began with a low-fat, high-carb and moderate-protein diet: basically half a cup cooked oats and boiled eggs for breakfast, rice cakes and peanut butter or an apple as snacks, veggies, brown rice and meat for lunch, and veggies with meat for dinner,” Malebo explains.

The new diet did wonders for Malebo – she ended up losing 12kg. She also fell in love with indoor cycling and aerobics. “I stuck to that because I have good rhythm, the music was great and I generally enjoyed the classes,” she says.

As time went on, Malebo’s diet evolved to fit her needs. Her partner introduced her to a low-carb, high-fat, moderate-protein eating plan, which helped her lose a further six kilos. Best part? She’s never hungry! “As a result there isn’t much temptation to snack on unhealthy foods,” she says.

READ MORE: “I tried the 8-hour diet – and the results were not what I expected”

Breakfast now consists of two eggs, two rashes of bacon, unprocessed cheese and half an avo with black coffee.

Supper: Greek salad with chicken, drizzled with olive oil and vinegar. And every two weeks she’ll allow herself fries and hot wings. “One cheat meal every two or three weeks won’t erase your hard work. You just have to be disciplined,” she says. She’s also upped her exercise to include more spinning and weight training.

“[The weight] came off gradually. Some weeks you drop 1.5kg, other weeks just 200g, or even nothing, so it’s up to you to keep yourself motivated and not let the scale put you down,” she says. “[Sometimes] the voices in my head would tell me ‘I’m not pushing hard enough’ or ‘I need to eat less to see results,'” she admits. But despite the struggles, she kept fighting.

Stay consistent, keep showing up: “I can’t put enough emphasis on the word consistency. This is the key to reaching any goal you’ve set for yourself.”

Work at your own pace: “Don’t compare yourself to other people – you don’t know what they did to get to where they are. We’re all built differently; what works for your best friend might not work for you.”

Everything in moderation: “Your weight-loss journey is not Death Row – you’re allowed to have a slice of pizza occasionally. Just make sure you have enough self-control not to eat the entire box in one go.”

This article was originally published on Women's Health SA.

We live in a world where facts and fiction get blurred
In times of uncertainty you need journalism you can trust. For 14 free days, you can have access to a world of in-depth analyses, investigative journalism, top opinions and a range of features. Journalism strengthens democracy. Invest in the future today. Thereafter you will be billed R75 per month. You can cancel anytime and if you cancel within 14 days you won't be billed.
Subscribe to News24
Related Links
This curvy blogger is recreating celeb looks – to show what A-lister outfits would look like on a...
"I've been teased for being too skinny, but the insults are the least of my problems when my...
The 9 best apps for your weight loss needs, according to experts
Next on Life
Listen to your heart: Do you know how to check for a normal heartbeat? It could save your life