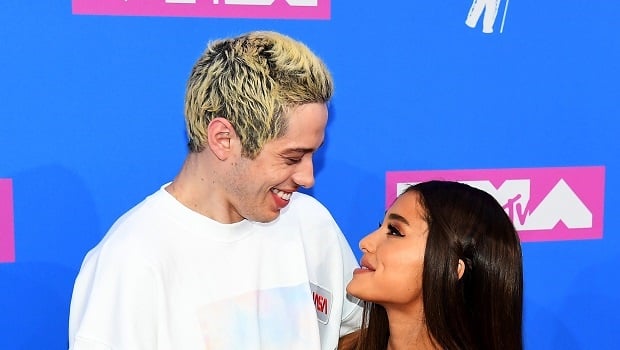 Ariana Grande and her fiancé, Pete Davidson at the 2018 MTV Video Music Awards

In recent news, Pete Davidson was talking about his romance with his fiancée, Ariana Grande on the Weekend Update segment of Saturday Night Live. As one of the the show's star comedians, Pete made jokes in between about what it's like being engaged to Ariana, and a lot of what he said left a lot of people cringing instead of laughing.

According to ThisIsInsider.com, Pete said "Last night I switched her birth control with Tic Tacs. I believe in us and all, but I just want to make sure that she can't go anywhere."

For so many reasons, this joke isn't a good one, especially in time when women are fighting for agency and for the right to chose what they do to and with their bodies.

I know he meant it as a joke and didn't really replace her bc, but he really made a joke about a white male taking away control of a female's body without her consent, right after Cosby and Kavanaugh jokes. Not funny.

Then there is the ex trump staffer that slipped his mistress an abortion pill. Agreed that it was meant as funny, but timing was so off.

Good show, until @petedavidson showed up and "joked" about switching @ArianaGrande's birth control with tic tacs, to "make sure" she didn't go anywhere. Talk about tone-deaf, especially this week. #DoBetter

READ MORE: A new study reveals that 47% of people think that you can’t withdraw consent after undressing

As much as I would like to pause here for a moment to let the seriousness of this sink in, I realise that, unfortunately, this is not an unfamiliar issue for many South African women, and for women globally, and neither is it remotely a laughing matter. In South Africa alone, there are numerous cases where men either 'trap' women in relationships by getting them pregnant without their consent, or they orchestrate an abortion against their will.

The issue is one that's bigger than switching birth control pills with breath mints. It's about the idea behind it - its about the "I just want to make sure that she can't go anywhere" part of Pete's statement, and the fact that this is something that men not only consider but accomplish.

In addition to feeling entitled to a woman's body and what she does with it, men have reportedly taken a step further by taking it upon themselves to ensure the outcome they want is guaranteed, without the woman's consent. Earlier this year, Africa News published an article around forced abortions. According to the article, Dr Sindisiwe van Zyl started #HeartBreakHotel and women posted stories of what they endured at the hands of their partners.

One of the women explained that her boyfriend had allegedly put a pill in her tea and slipped others in her vagina to induce a miscarriage - without her knowledge. Stealthing, which is a form of sexual assault, is another way that women are violated of their rights and left without agency. If you don't know what stealthing is, it's the removal of a condom during sex without consent; and what it does is violate a woman's decision for safe sex and her choice to conceive.

The scary thing is that there is more than one woman who has had this experience, and according to Bhekisisa.org, this is considered to be a war on women's bodies.

READ MORE: What is stealthing and why is it illegal?

The gist of the matter is that women are only granted responsibility where men don't want it, otherwise their choices are stripped away and what happens to and with their bodies is decided by a man, or by society.

An article on Bustle.com shows the different misconceptions and stigmas that exist around sexual health and women, and one of the stigmas around birth control is that women are solely responsible for it, just as they are 'at fault' for falling pregnant, or even miscarrying.

In Bustle.com, Amanda Chatle writes that she experienced disparity between her and her partner when the news of her pregnancy came. She explains that, while she was considering keeping the baby, "all that came out of his mouth was that his dreams would be ruined and his life would be destroyed, if we didn’t get the abortion". She felt solely responsible for falling pregnant and for losing the baby as well, however she didn't feel that any of the choices were hers.

"He didn’t seem to realise that only one of us would be getting that abortion he so desperately wanted: me," she writes; and that is what many women experience when they are not given the choice of birth control or an abortion, or anything else that they're supposed to be allowed to do regarding their bodies.

We live in a world where facts and fiction get blurred
In times of uncertainty you need journalism you can trust. For 14 free days, you can have access to a world of in-depth analyses, investigative journalism, top opinions and a range of features. Journalism strengthens democracy. Invest in the future today. Thereafter you will be billed R75 per month. You can cancel anytime and if you cancel within 14 days you won't be billed.
Subscribe to News24
Related Links
"I was ashamed of getting my period so I kept it a secret"
"I just need to know his status - How do I bring up the topic without offending him?"
Why on and off relationships are bad for you
Next on Life
What position should you sleep in, and is there a ‘right’ way to sleep?