Are wellness shots with turmeric, ginger, or ACV actually good for you? A dietitian weighs in 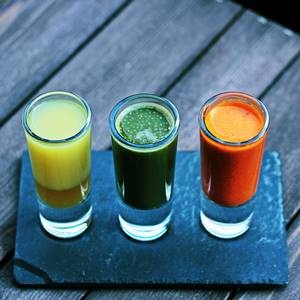 Are wellness shots actually good for you?
Toa Heftiba/Unsplash

As a tired mom of a germ-spreading toddler, I’m constantly on the hunt for a miracle potion that will boost my immunity, restore my energy and make my skin sparkle (e.g. make me feel like I did pre-baby). And while I typically prefer to eat my calories rather than drink them, I’ve seen enough people pulling tiny vials of turmeric out of their totes to make me wonder if wellness shots are what have been missing from my life.

Wheatgrass shots in particular have been around for a while, but recently juice bars have expanded their wellness shot selection to include ingredients like ginger, turmeric, apple cider vinegar, aloe and matcha. These health tonics are basically condensed versions of cold-pressed juices.

READ MORE: Yes, We All Know We Need To Aim For A Balanced Meal, But What Does That Look Like On A Plate?

They say the best things in life come in tiny packages (hello, diamonds!), and juice bars and health bloggers alike are touting wellness shots as being a quick and easy solution for incorporating vital vitamins, minerals and antioxidants into one’s diet. There’s an undeniable halo of health around them, but are wellness shots worth drinking regularly? Before opening my wallet to another wellness trend, I spoke with registered dietician Monica Auslander Moreno of Essence Nutrition, to get my facts straight.

Are wellness shots actually good for you?

Well, they aren’t bad for you. But they also probably won’t make any game-changing impact on your health, either. “I don’t have tremendous faith in wellness shots in general for any purpose — I don’t care if it’s wheatgrass, or kale; these tiny amounts do not a healthy diet or a healthy person make,” says Moreno. In lieu of drinking wellness shots, which have no measurable benefits even when taken daily, Moreno would rather people make homemade salads and focus on eating real food.

READ MORE: The 10 Healthiest (And Least Healthy) Cooking Oils, According To Nutritionists

That being said, if your diet is lacking in fruits, vegetables and spices, there’s no harm in drinking certain types of wellness shots so long as none of the ingredients have negative interactions with your medications, says Moreno. As a general rule, she suggests making your own concoctions in lieu of shop-bought varieties in order to save money and avoid unnecessary sugars in the form of additives like orange juice or apple juice.

Can wellness shots do anything to help when I have a cold?

When Moreno is sick with a cold or feels one coming on, she makes her own emulsion of turmeric, black pepper, garlic, origanum and Manuka honey. Sometimes it helps, sometimes it doesn’t. But it’s the only time you’ll find her drinking any type of wellness shot.

Immunity and nutrition as a whole is so complex that it’s absurd to relay on any one, two, or even three ingredients to cure our ailments, she says. With enough rest, our immune systems should have the capacity to fight off whatever is plaguing us.

“People want to literally bottle up something and buy it and think, ‘Health!’” says Moreno. But if it makes you feel good (even if it’s just placebo) and isn’t hurting you or interacting with medication, knock yourself out.

What are the best wellness shots if I want to give them a try?

For anyone still considering incorporating wellness shots into your routine (and again, it’s up to you if you think you need to supplement your produce intake!), Moreno helped me break down the nutrition information behind the most popular health boosters.

Turmeric is the talk of the town because it contains curcumin, a potent compound known for its ability to reduce inflammation. Turmeric has been well-studied as an anti-inflammatory for muscular and connective tissue repair and can help alleviate gastrointestinal inflammation.

Moreno actually recommends it to athletes and individuals with Crohn’s disease, ulcers and colitis. As a Crohn’s sufferer herself, she knows it’s not going to cure her condition, but given that research suggests it may help mediate symptoms, she likes to sprinkle it on her food.

READ MORE: 4 Natural Sweeteners That Are Better Than Sugar, According To A Dietician

Okay, but will talking a daily shot of turmeric fight inflammation in the body? “Don’t have any expectations,” she cautions. One important thing to note about turmeric is, in order for it to become activated, the spice needs to be consumed with black pepper. So if you’re looking to turmeric as an anti-inflammatory, Moreno says make sure your wellness shot and/or food contains black pepper as well. You may also want to reconsider those pricey turmeric lattes (unless of course you just enjoy the taste — then by all means drink up!).

Known for its ability to ease nausea, bloating and vomiting, ginger is an anti-inflammatory that may help alleviate muscle cramping and menstrual pain. It also contains strong antioxidants that can benefit overall skin health. But while eating some ginger or drinking a shot with ginger as a primary ingredient may offer fast help for that nauseous feeling, it’s not totally clear just how much ginger you would need to eat regularly to reap skin benefits, for instance.

READ MORE: What To Eat Before A Morning Workout, According To Nutritionists

In general, ginger doesn’t have any contraindications, but it might not feel good in your body if you have reflux, says Moreno. A shot of ginger is unlikely to cause any harm, but since it’s super spicy, it’s often diluted with water, coconut water or sugary orange juice. “Nobody needs to drink orange juice, so consider [the fact that] you’re paying for a shot of sugar with some spicy extract,” she says.

Can a shot of apple cider vinegar a day really help keep weight gain at bay? Moreno says it’s fake news. “ACV can have very mild effects on blood sugars and satiety, but it’s not significant enough to [warrant taking] shots of it,” she explains. What’s more, drinking it straight up is ill-advised because it can corrode your oesophagus. And if you’re pregnant, Moreno says steer clear of unpasteurised ACV, which is often what you’ll find at juice bars.

Wheatgrass is loaded with vitamins A, C and E and is rich in iron, magnesium, calcium and amino acids.

But at the end of the day, it’s just another plant, and all plants have vitamins, minerals, fibre and phytochemicals, explains Moreno. “I don’t know how it became a thing; people must think, ‘if it’s green I’m going to drink it’ — but I would rather eat a salad,” she says.

The bottom line: Wellness shots are really just mini green juices. You can get enough vitamins and antioxidants from food if you’re eating lots of produce in a well-balanced diet, so you don’t need to spend money on wellness shots. But if they taste delicious to you and just make you feel good, by all means.

We live in a world where facts and fiction get blurred
In times of uncertainty you need journalism you can trust. For 14 free days, you can have access to a world of in-depth analyses, investigative journalism, top opinions and a range of features. Journalism strengthens democracy. Invest in the future today. Thereafter you will be billed R75 per month. You can cancel anytime and if you cancel within 14 days you won't be billed.
Subscribe to News24
Related Links
10 health benefits of ginger that are seriously impressive
The A-Z of turmeric
Is apple cider vinegar really all that?
Next on Life
Milk and dairy: Healthy choice or health risk?