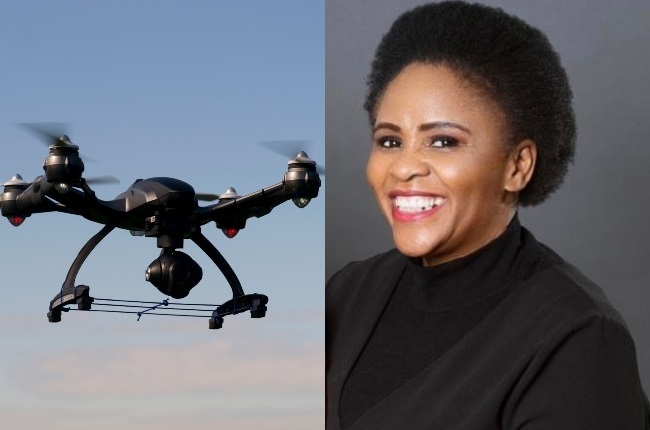 Queen Ndlovu, the swashbuckling founder and CEO of QP Drone Tech, has an unwavering belief in her unmanned aircraft.

As an international published drone author, Ndlovu knows the technology has the potential to change the lives of all South Africans. It can create thousands of jobs, shift the business landscape and uplift the country's economy.

Based in Pretoria, Gauteng, QP Drone Tech was founded on this belief.

"I saw countries such as Rwanda launching drone delivery services, which excited me. When I researched further, I learnt it can be applied to other industries other than deliveries," said Ndlovu.

When KwaZulu-Natal was hit by floods in April this year, she looked on in horror, and at the same time, regret.

At that moment, she knew her drone services could have been part of a search-and-rescue operation.

"We could have saved many more lives if our drones were there," Ndlovu said.

The company has made a difference in the country already, despite the sluggish uptake of drone technology.

In March this year, QP Drone Tech launched a project in Alexandra that saw its drones fly over the suburb and assess its vulnerability to disaster.

"The whole idea of this demonstration was to inform decision makers of these vulnerable areas and that they do not have to be caught unaware. When you are prepared for disaster in your country the risks are lessened," said Ndlovu.

QP Drone Tech exists in a time when the drone industry in South Africa is still a burgeoning one with little investment from the public and private sectors.

But this has not deterred the serial entrepreneur - who counts a maritime business, property and an artisan school and trade centre as part of her portfolio - from pursuing her dream of becoming a global player in the tech space.

Ndlovu has jumped into the drone game head-first.

"I always wanted to be a global player and drone technology provides the opportunity to do so," she says of her company which is looking to open its own manufacturing facility in South Africa and a satellite office in Nigeria.

The idea for QP Drone Tech was set in motion in 2017, but how did Ndlovu cut her teeth in this interesting industry?

She put education first when she enrolled for a Master's degree in entrepreneurship at Wits Business School to learn more about the convergence of business and technology.

In 2018, she spent six months in Shenzhen, the Silicon Valley of China, to become "familiar with the way the drone technology was being built and used".

The business model is based on partnering with engineers and commercialising their innovations.

"My strength is in helping these people grow their businesses," said Ndlovu.

READ MORE | REVIEW | My first flight ever was with an all-female flight crew to Cape Town. Here's how it went She added the government had not fully realised the value of drones during disasters.

With the looming threat of climate change, a lot more natural disasters can and will occur.

Drones can help the government respond swiftly and efficiently. Their adoption by both the public and private sectors in South Africa is scant with just a few noteworthy projects to date.

READ MORE | Fancy a wedding on a private jet? This African airline is taking weddings to the sky

These include the SA National Blood Services' delivery project launched in 2019 and an anti-poaching project in the Kruger National Park in 2016.

The Drone Council of South Africa has criticised the government's sluggish uptake, saying the country was missing out on innovations because of red tape.

So far, QP Drone Tech has managed to partner with few public entities such as the Western Cape government's emergency medical services.

It is the only provincial government with a Remote Piloted Aircraft Systems Operator Certificate (ROC) thus far.

The ROC, which is awarded by the SA Civil Aviation Authority, gives institutes with an aviation service the licence to fly unmanned aircraft such as drones.

Ndlovu has combined drone technology with her expertise in education and training.

It covers piloting, maintaining and repairs, data processing, job prospects within the industry and safety and regulations.

For Ndlovu, this is QP Drone Tech's attempt to close the digital divide between the haves and have-nots and make youth aware of tech jobs they can consider in the future.

"We want to expose our local communities to drone and robotics technologies so as to open up new opportunities. QP Drone Tech and South Africa Flying Labs are going a step further come October. With backing from UNICEF, they will be hosting the first Drones and Robotics in Disaster Management Conference in Cape Town.

It is this belief in drone technology's potential to uplift South Africa's youth that gets Ndlovu out of bed every day.

"Anyone who shares the same vision as I will know that drones can empower communities," she said.

We live in a world where facts and fiction get blurred
In times of uncertainty you need journalism you can trust. For 14 free days, you can have access to a world of in-depth analyses, investigative journalism, top opinions and a range of features. Journalism strengthens democracy. Invest in the future today. Thereafter you will be billed R75 per month. You can cancel anytime and if you cancel within 14 days you won't be billed.
Subscribe to News24
Next on Life
Simple tips to get your home spring ready