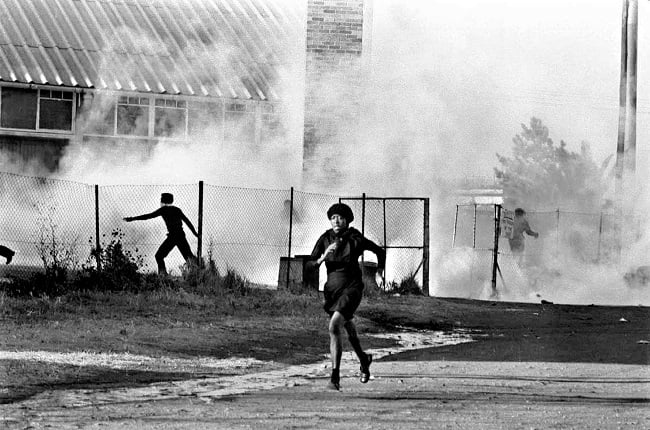 A peaceful protest turned into a massacre when police opened fire on the protestors on June 16, 1976, in Soweto, South Africa. (Photo by Bongani Mnguni /Foto24/Gallo Images/Getty Images)

A peaceful protest turned into a massacre when police opened fire on the protestors on June 16, 1976, in Soweto, South Africa.

Young people were fighting against the apartheid government's implementation of Afrikaans as the main medium of instruction at school. They took to the streets to peacefully march to Orlando Stadium but were quickly met with police brutality according to SAHistory.org.

According to the Daily Vox when the police were unable to contain the protest and push back from students, the anti-urban terrorism unit was called in. "They came with machine guns to face up to teenagers and closed off movement into Soweto. Unarmed black police officers were withdrawn and the army came in. Helicopters dropped tear gas onto the students."

Furthermore, "skirmishes continued into the morning in some parts but the violence lasted three days before schools were officially shut", reports the Daily Vox.

Youth Day in SA commemorates the lives and bravery of the students who were killed during the Soweto Uprising. What details have we have forgotten since?

We live in a world where facts and fiction get blurred
In times of uncertainty you need journalism you can trust. For 14 free days, you can have access to a world of in-depth analyses, investigative journalism, top opinions and a range of features. Journalism strengthens democracy. Invest in the future today. Thereafter you will be billed R75 per month. You can cancel anytime and if you cancel within 14 days you won't be billed.
Subscribe to News24
Related Links
What Youth Day Means For SA’s Celebs
Is it really about who you know and not what degree you have?
These are the universities you should you go to, to earn the most money
Next on Life
A little stress now and then is actually good for your brain, say scientists