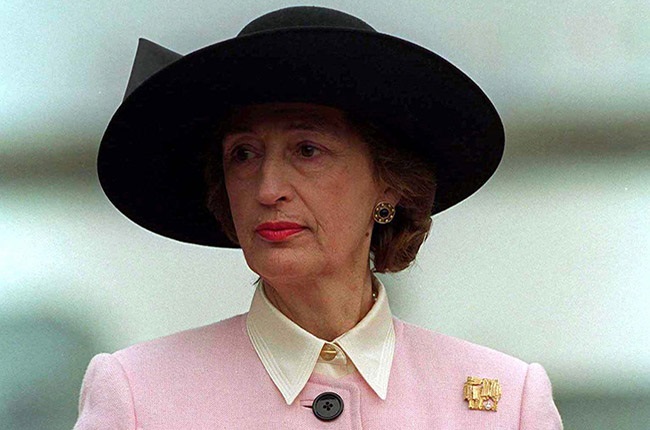 A senior member of the royal household resigned Wednesday for repeatedly asking a black British charity campaigner where she was "really" from, plunging Buckingham Palace into a fresh racism row.

The controversy erupted as Prince William and his wife Kate made their first visit in eight years to the United States, where his estranged brother Prince Harry and mixed-race wife Meghan live.

Susan Hussey, 83, a godmother to William, was named by UK media as the woman in question who has stepped down from her role as a courtier to Queen Consort Camilla.

Ngozi Fulani, the chief executive of the London-based Sistah Space group, recounted the exchange on Twitter, referring to her only as "Lady SH".

Fulani is a prominent advocate for survivors of domestic abuse, and was attending a reception at the palace with other campaigners on Tuesday.

After saying she was born and raised in the UK, and was British, Fulani said "Lady SH" asked her: "Where do you really come from, where do your people come from?"

She was then asked: "When did you first come here?"

Fulani repeated that she was a British national born in the UK and was forced to say she was "of African heritage, Caribbean descent".

The exchange, she said, left her with "mixed feelings" about the reception, which was hosted by Camilla to highlight violence against women and girls.

Mixed feelings about yesterday's visit to Buckingham Palace. 10 mins after arriving, a member of staff, Lady SH, approached me, moved my hair to see my name badge. The conversation below took place. The rest of the event is a blur.
Thanks @ManduReid & @SuzanneEJacob for support???? pic.twitter.com/OUbQKlabyq

"We have reached out to Ngozi Fulani on this matter, and are inviting her to discuss all elements of her experience in person if she wishes," a statement read.

"In the meantime, the individual concerned would like to express her profound apologies for the hurt caused and has stepped aside from her honorary role with immediate effect.

"All members of the Household are being reminded of the diversity and inclusivity policies which they are required to uphold at all times."

Hussey was a long-serving "lady-in-waiting" to Queen Elizabeth II, and was described as one of the late monarch's most trusted aides.

Camilla has scrapped the formal roles of ladies in waiting, but Hussey, whose late husband was a former BBC chairman, was kept on as a royal retainer by Charles.

The row threatens to cloud William and Kate's three-day visit to Boston, where Charles' heir will award the Earthshot Prize for initiatives to tackle climate change.

Last year, William insisted "we are very much not a racist family", after Harry and Meghan alleged that an unidentified royal had asked what colour skin their baby would have.

William has since praised the "immense contribution" of the "Windrush" generation of Caribbean migrants, who helped Britain to rebuild after World War II.

Despite arriving legally, many were later wrongly detained and even deported under the Conservative government's hardline immigration policies.

As William and Kate visit Boston, Harry and Meghan are due in New York for another awards ceremony, although the feuding brothers have reportedly no plans to meet.

Harry and Meghan quit royal life in early 2020 and moved to California, winning many fans among younger people and in the black community for taking on the British establishment.

The UK media, though, has repeatedly accused them of exaggerating their unhappy plight as members of the royal family but the couple may point to the latest allegations as vindication.

The palace was earlier this year accused of being tone deaf to calls from Caribbean countries which still have Charles as head of state to acknowledge Britain's past role in slavery.

William and Kate's visit to Jamaica was also criticised for smacking of colonialism.

She said it felt as if they were "not being treated as if we belong" or "as if we are British".