The blast blew Kathy Comerford out of her shoes: 9/11 survivor talks about terror attack 20 years later This is the real-life story of Kathy Comerford, a survivor of the terror attacks against the United States on 11 September 2001. Here her story is told through the new National Geographic docu-series 9/11: One Day In America and a one-on-one Zoom interview with News24's lifestyle editor Herman Eloff.

On a beautiful Tuesday morning in New York City at precisely 08:46 on 11 September 2001, hijacked Flight 11 crashes into the north face of the North Tower of the World Trade Centre, between floors 93 and 99.

Absolute chaos instantly descends on the Financial District of one of the busiest cities in the world. Just 16 minutes later, at 09:03, Flight 175 crashes into the south face of the South Tower of the World Trade Centre, between floors 77 and 85, with a massive explosion.

If anyone thought the first crash was a horrible accident, there was now no doubt that America was under attack.

The impact of the second plane crashing into the second tower was so strong that it blew Kathy Comerford out of her shoes. Kathy, who was the head of events for Morgan Stanley investment banking company and in a meeting on the 70th floor of the South Tower, hit the marble wall in front of her with her upper body.

In a new six-part documentary, which premieres on National Geographic (DStv 181, Starsat 220) on Sunday, 29 August at 21:00, Kathy and other survivors describe the harrowing ordeal of the darkest day in American history from their own perspectives.

What stands out most about Kathy is her calm and confident demeanour when she talks about the day when 19 militants associated with the Islamic extremist group al Qaeda hijacked four planes and attacked the United States. Two planes hit the World Trade Centre, one flew into the Pentagon, and a fourth crashed in a field in Pennsylvania when the passengers aboard managed to overpower the hijackers and save thousands of lives. The World Trade Centre during the 9/11 terrorist attacks. (Photo: NIST) 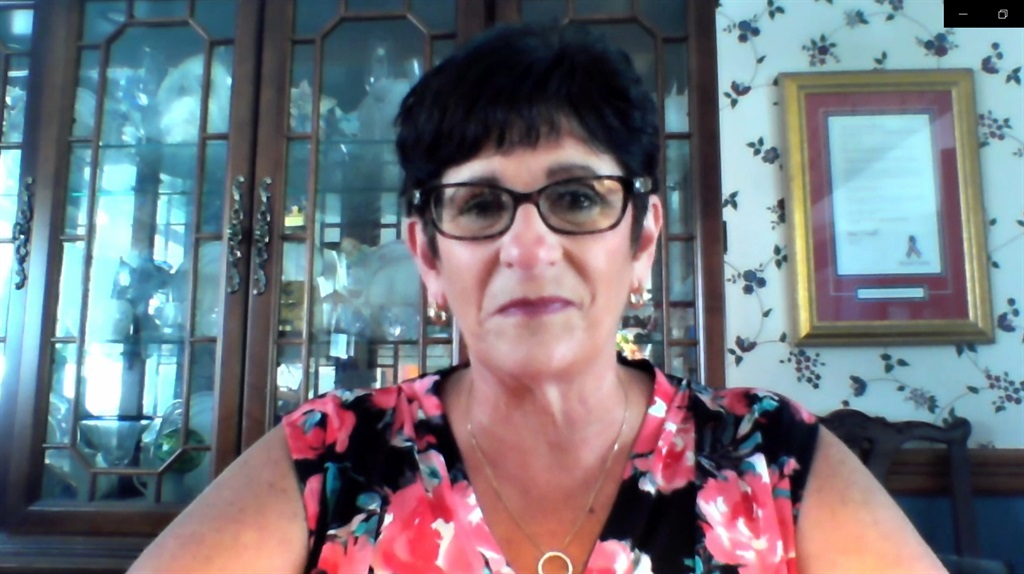 Kathy Comerford in a Zoom call with News24.

When Kathy and I connect via Zoom one evening in August, she's wearing a pink and black floral top, and her short black hair is perfectly complemented by a pair of stylish dark tortoiseshell glasses. Behind her is an antique art deco-style display cabinet featuring decorative plates and a framed certificate against a flower print wallpaper.

"I find it very important to continue to tell this story," she says stoically. "There's a whole generation that has been born since 11 September that has no idea. They weren't alive. They don't know. They only hear snippets. I also think it's really important to have people that were there on that day tell their story in an honest and open way. Without any commentary, without any political or journalistic bias. Just allowing the people that were there to share their first-hand experience. It's very important to me that this story be told and be captured for others to see for many, many years."

Kathy's story of survival is filled with determination and the refusal to give up. Asked if that's part of her personality, an instinct that kicked in, or something much deeper, she answers: "I think it was that moment."

She pauses to reflect on the event that happened nearly 20 years ago.

"I mean, I've been in the business world for 35, 40 years - so you know - I have some confidence. But when that happened, I was like, 'Heck no. I have three children at home and my husband. I'm not orphaning my kids in this building. I'm getting out of here. Then a very strange calm came over me and I just almost slipped into what you could call 'mommy mode'."

Kathy and her co-workers made their way to the emergency exits and started descending the stairwell. They came across a double amputee with artificial legs who said he couldn't go any further. Two men picked him up and started carrying him downstairs.

As Kathy moved down the stairs, she encountered a woman who was having an asthma attack. "I had an inhaler in my pocketbook, and I handed it to her, and I said, 'Here. Just use it'. She used it, and she could breathe and continued down. Everybody was just doing what they needed to do to help. It was a constant, very quick flow, but people were kind to each other," Kathy adds and for a brief moment her face reflects deep sadness and pain that she's bravely been battling to keep under control as she recounts her nightmare experience.

9/11: One Day In America, produced officially in partnership with the 9/11 Memorial & Museum, is the most detailed documentation to date of what happened on that day. The series masterfully weaves together actual eyewitness footage from the day collected over the last 20 years. The filmmaking team had to work through 951 hours of archival footage – some never seen before – to create this seven-hour tour de force that includes chilling first-person narratives of the first responders and survivors who were there. Additionally, the filmmakers spent three years collecting 235 hours of interview footage with 54 people to recreate the day chronologically, all through first-person accounts. 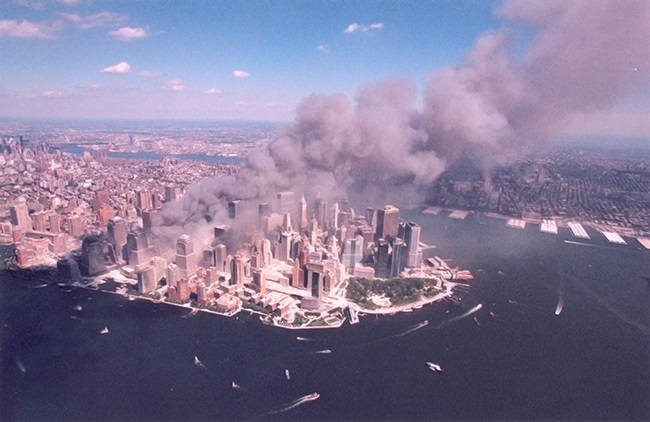 The man singing in the dark

"I came out on the 44th floor because that's where our stairwell ends. There was panic and bedlam, and it was pitch-black. Then all of a sudden, in this darkness, there's this voice. He was singing, and I think the singing distracted everybody. They stopped in their tracks to see why he was singing or where he was singing from, and it calmed everybody down. Then he said these words. He said: 'Today is a proud day to be an American'."

The man singing in the dark was Rick Rescorla, head of security at Morgan Stanley Dean Witter Security and a decorated Vietnam hero. Since the 1993 truck bomb detonated below the North Tower, killing six and injuring thousands, he was deeply concerned about the security and safety of everybody in the World Trade Centre. According to Kathy, Rick was convinced the towers would be attacked again and that if it were to happen, it would be via the sky because it would be difficult to protect people against such an attack.

Rick ensured the stairwells were redone and repainted in case of an emergency. Four times a year, he would do mandatory fire drills, and Kathy and her co-workers would walk from the 70th floor all the way down to the sky lobby to get out of the building. "At first, people would just assume this is over the top, exaggerated. Do we really need to do this? My favourite line was, 'lightning never strikes the same place twice'. After '93, I didn't even think about it because I thought no one was going to attack the same building twice," Kathy admits in the film.

But it did happen again, and nothing could have prepared anyone for the devastation and loss that followed. "That day, things were on fire. Things were blowing up, and he really was able to refocus everybody pretty quickly and disperse the crowds to the proper stairwells to get them out of there. Seeing Rick was probably like seeing your guardian angel when I saw him on 44. I wasn't nervous at that point. I really wasn't."

According to Kathy, they started to panic when they got to about the 22nd floor. The integrity of the building was rapidly deteriorating with visible cracks beginning to show. "We were like, 'holy crap, we've got to get out of here'. We really started to pick up the pace, almost running. All I kept thinking was, 'this building is not taking me. I'm going home to my kids'. So, I kept going and going. When we got to the bottom floor, we were yelling, 'We're here! We're here!'. Some people were clapping. When we emerged out of the building, there was a sense of relief that we were safe.

"They ushered us across the street – my little group. We sat down on the curb. They were triaging right behind us. They were carrying very wounded people behind us, laying them down and trying to triage what they could do. When we looked up and saw the burning of our building, my first thought was, 'This is coming down. I'm not going to die here on the street. I just got out of that building. I have to get out of here'."

Fifty-six minutes after the plane hit the South Tower, it collapsed in a deafening roar that sent monstrous clouds of dirt and debris billowing through the streets of the city, devouring buildings and blocking out the sunlight. In its wake, it left death, an eerie silence, and post-apocalyptic scenes in such contrast to the start of the day that it was impossible to comprehend. 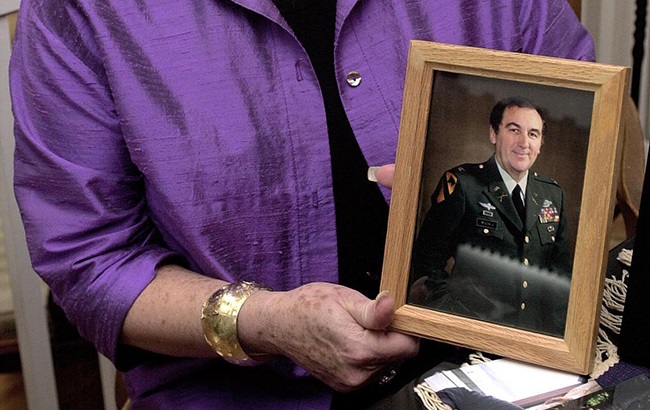 Susan Rescorla at her New Jersey home with a picture of her husband Rick, head of security for Morgan Stanley Dean Witter and is missing presumed dead after the terrorist attacks on New York. (Photo: Tim Ockenden - PA Images)

'My husband picked me up in his arms'

During our call, Kathy recounts what happened after she arrived home. "I stepped out of the car at seven o'clock that night into my driveway and my children, the whole neighbourhood, everybody was sitting there. I basically collapsed. I couldn't have taken another step if you paid me ten million dollars. I just sat on the floor, and I couldn't. I couldn't take another step. After a few minutes, my husband actually just picked me up in his arms and put me in the car, and he rushed me to the emergency room. I had many cuts on my head, shoulder and neck that I didn't even feel at the time.

"When we arrived at the hospital, it was very surreal, because when I said I was in the World Trade Centre, they were like, 'Oh, my God. We've been waiting. We've all been on standby to help people. And you're the only person that's come in'."

A total of 2 996 people died in the 9/11 attacks, and many hospitals in the area stood ready to help the wounded who never arrived due to the large number of fatalities when both towers collapsed.

"The next morning, the children had gone to Catholic school, and they all had masses. I had a friend pick me up, and I had a neck brace on, and I had a cane, and I was like, 'I have to go'. I went to one, and then I went to the other. I kept trying to stay awake until I finally crashed. I don't know if it was whether I was afraid to fall asleep or I was just so in awe with the fact that I survived what had happened and I was just trying to deal with it."

Kathy later learnt from co-workers that Rick was last seen heading up the stairs in the South Tower shortly before it collapsed.

The filmmakers confirmed that Rick Rescorla and his security team members Jorge Velazquez, Godwin Forde and Wesley Mercer were in the South Tower when it collapsed.