Eight Days in July: Book delving into unrest and looting that followed imprisonment of Zuma launched 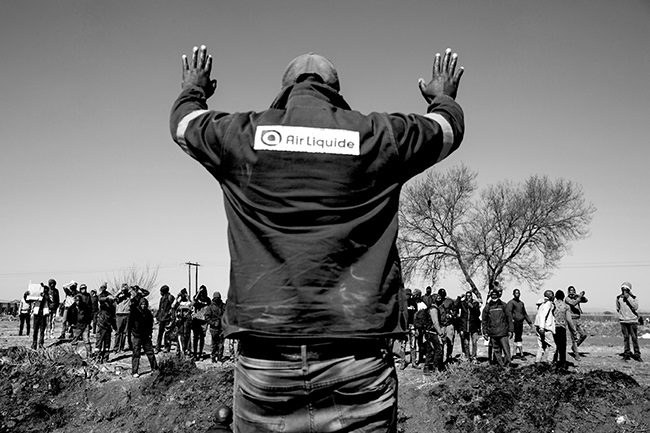 A community member appeals to a crowd for calm on 14 July 2021 in Vosloorus. (Photo: James Oatway/Getty Images)

"I had Covid when all this was happening, so I was sick in bed trying to coordinate our coverage," said News24 political editor Qaanitah Hunter of the unrest and looting in July 2021 – events covered in Eight Days in July: Inside the Zuma Unrest that Set South Africa Alight (Tafelberg), which was launched on 8 November.

Hunter, along with fellow News24 journalists Kaveel Singh and Jeff Wicks, put the book together.

It deals with the lead-up to the looting and attacks on infrastructure, and then the events themselves, with a comprehensive analysis of the context – the failures of intelligence and law enforcement, as well as the involvement of forces supporting former president Jacob Zuma, and opposed to his successor, President Cyril Ramaphosa.

"It started in the middle of last year, with Zuma and his refusal to appear at the Zondo Commission," said Hunter.

Zuma, who had been implicated in state capture by many witnesses at the Zondo Commission, refused to testify, which led to his being censured by the Constitutional Court. When he defied the court, he was sentenced to 15 months’ imprisonment, and it then became a standoff between Zuma's supporters and the police, as the latter sought to carry out the warrant for his arrest – "lots of Zuma-ing", said Hunter.

"There had been threats that the country would be brought to a standstill if Zuma was jailed," said Hunter, "but nobody predicted the extent to which it was allowed to happen."

After Zuma was jailed, the trouble began in KwaZulu-Natal, with the N3 highway being barricaded, and episodes of looting breaking out in the province. There were attacks on national infrastructure. The police were absent, and the violence and looting spread over the following days, hitting Gauteng as well. Singh and Wicks were on the ground in KwaZulu-Natal and Gauteng respectively as this happened, and their eyewitness accounts give a rich and detailed picture of being caught in the middle of the looting and destruction.

Singh described how he was "camped outside Westville prison", where it was anticipated that Zuma would be jailed.

"There were rumblings," he said, but what happened wasn’t the expected protest.

"Protests usually clear up in a few hours – police get there, clear the roadway – but there were running skirmishes already by Friday morning," he said. "Things very quickly started to unravel."

He saw plumes of smoke, people putting up barriers, and the stoning of vehicles. "The vehicle I was in, the work vehicle, was being stoned," he said. He "couldn’t get out for quite a few hours".

"By Friday, we could see this was not normal protest action," said Wicks. "Things began to simmer on Friday, and violence escalated rapidly over the week."

There were simultaneous protest actions all over, and violence flared up in Johannesburg, with running battles between looters and police. It looked chaotic, but it was "ordered and intentional", with a "high level of coordination".

The modus operandi, said Wicks, was to start looting in one place, then, as law enforcement arrived, to move on to another place. The strategy, as he saw it, was "to really stretch law enforcement". The outnumbered police stood by for long periods. Later, the military was called in.

Hunter, who analysed intelligence reports and other material that came into the hands of the journalists, said "the looting that you saw was a symptom… Law enforcement was overrun, and looting was a consequence".

"What we established in the book," she said, "was three things: the capacity of law enforcement was completely denuded, it was diminished… There was a perfect storm of competing interests who used the incarceration of Zuma for cover… and there was the weaponisation of social problems for nefarious political ends," in particular poverty, inequality and unemployment. "South Africa was a tinderbox."

This, she said, was an "attempt to topple the president of the ANC by people in the ANC".

"People at the heart of it knew the incapacity of the police at the time," she said. The police were "stretched because of funding issues", and it was a perfect opportunity for criminality – as shown by the ATMs in looted shopping centres that were literally yanked out of the wall and had their money taken.

The attacks on infrastructure were conducted by "people with military background", said Wicks. "It’s something we saw in both provinces. There was a very distinct modus operandi… It wasn’t only looting, but vandalism," which he describes as "a key trope in all of this".

He describes how "a massive warehouse was looted to the rafters and then set ablaze, along with all the shopping centres that surrounded it".

It wasn’t only the poor, he said: "The violence was seeded." The intention was "to inflict maximum damage".

"It’s not random that things like ports were attacked, or King Shaka International Airport," said Hunter. There were planned attacks on the Vaal Dam and the JSE. "It was coming from people who were trained to overthrow an illegitimate government," she said, people trained to be saboteurs, who had now turned on the democratic state and, in particular, the Ramaphosa government.

"What we set out to do was to give people a bird’s-eye view of what happened," said Wicks. "This is the largest event that imperilled out democracy since 1994."

Putting the book together, said Hunter, required the combination of "three different perspectives and voices".

"It was a month of not sleeping," she said, "but our strengths really complemented each other."

BOOKS IN YOUR INBOX: Subscribe to News24's weekly books newsletter, Page-turners.
We live in a world where facts and fiction get blurred
In times of uncertainty you need journalism you can trust. For 14 free days, you can have access to a world of in-depth analyses, investigative journalism, top opinions and a range of features. Journalism strengthens democracy. Invest in the future today. Thereafter you will be billed R75 per month. You can cancel anytime and if you cancel within 14 days you won't be billed.
Subscribe to News24
Next on Life
EXCERPT | Pamela Anderson recalls meeting Hugh Hefner for the first time in Love, Pamela