Francoin Visser in his garage, where the amazing Double Bacon titanium frame, was imagined and designed. (Photo: point4five_ind)

Every mountain biker has imagined that dream bike, usually a carbon-fibre dual-suspension frame with wireless gears and a sub-10kg weight.

But what does an industrial designer with deep experience in the cycling industry envision as their dream bike? That’s exactly the after-hours design journey Francoin Visser embarked upon during lockdown.

"At the start of lockdown, like everyone else, I worked fewer hours and had time to start tinkering with the idea of a dream bike after hours." Although Francoin had experience working in design teams, he had never designed a complete bike. He desired a dream mountain bike made from one of cycling's traditional metal materials: chromoly steel or titanium.

"It’s not easy to have your own low-volume frame made. Factories in Asia won’t start the process unless you order a minimum of 50 frames." Francoin thought he could circumvent the issue by using a local BMX builder, to make his dream dual-suspension mountain bike in steel, but the project unravelled. There are many technical reasons for choosing a titanium frame. But it helps that titanium tubes, look great without paint, too. (Photo: point4five_ind)
Ride24

Like all triumphant DIY design stories, Francoin’s solution for building his own dual-suspension mountain bike came from an unexpected source.

"Eventually, I discovered an Asian factory that make folding-bikes. They’d never made a dual-suspension mountain bike before, but were open to the challenge. Importantly, they had titanium fabrication skills, which is what I wanted."

An experienced dirt jumper and mountain biker, Francoin wanted his frame to be a no-compromise trail and enduro-lite bike. Or 'trailduro' to be exact. "I want to use titanium everywhere. Not only the frame. But titanium is notoriously difficult to work with, which is why titanium bikes are so rare – and coveted." What happens in your garage? Some failed DIY projects? Francoin used a corner of his, to create an amazing titanium mountain bike. (Photo: point4five_ind)
Ride24

As with all great things – it happened in the garage

Like the Wright Brothers and many of history’s great car and bike designers, Francoin worked on his titanium frame idea in the garage.

But how did he happen upon the final specification? And did other mountain bike designs influence him?

"I broadly knew what I wanted and had some input from a knowledgable full suspension frame designer Thomas. You’ve got to respect data science and use other mountain bikes as a reference. I made a spreadsheet with 30 trail and enduro mountain bikes. It was a lot of homework, but it allowed me to dilute the specifications and find the numbers I needed for my design."

And those numbers corresponded to a burly mountain bike, with 160mm of rear-suspension travel.

Designing a bike in your garage, and having it built in Asia, requires a lot of meticulous communication and on-point project management.

"Of course things can easily get lost in translation. But I knew what I wanted and stayed true to some of the specification ideas on my bike. You have to do that. A contract manufacturer will always try and change your design to suit their tooling and production methods." 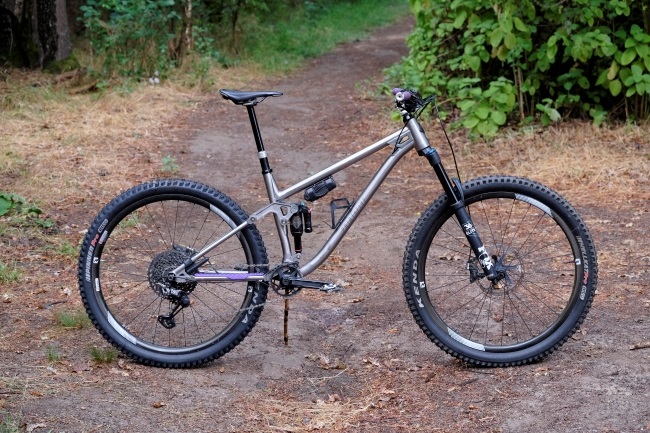 Being obsessive about suspension pivot placement

Once Francoin has an awareness and confidence relating to his frame specification and geometry, how did he bring the idea to a relatable state?

"I used Bike Checker Linkage, to establish the pivot points on my frame. This software is powerful but easy to use and can help you avoid misplacing your suspension pivots."

After establishing the ideal location for his frame’s suspension pivots, Francoin used Autodesk Fusion 360 to give his bike form. "This programme helped me draw the bike in its entirety. You get a feel for the volume and aesthetics. Autodesk Fusion 360 also enabled iterations, shareability and track changes between my garage design studio, and the manufacturer in Asia."

At an advanced stage of the project, Francoin assembled his entire design, from 3D-printed sections, to evaluate what it would be like as a 'life-sized' version. Designing for a specific suspension shock

Where most riders use geometry numbers as their basis of comparison when deciding between mountain bikes, Francoin had a different requirement. His custom titanium mountain bike was designed with a specific shock in mind.

"I wanted to use an air shock, not a coil. And not only that. I wanted to use a particular air shock: Manitou’s Mara. And that meant shaping the frame to accommodate it. Not to mention working with that pivot point placement, to optimize the leverage ratio curve, which ended up being 22.8%." Did anything go wrong?

With any custom frame design project, there are inevitable concessions between perfection and purpose. Did Francoin’s project suffer any ‘surprises?’.

"The factory used pallet bearings for the suspension pivots even after specifying sealed quality bearings. And those are useless on a dual-suspension mountain bike frame. I had to extract and replace them with proper bearings. And the finishing was overdone, with sandblasting where I hadn’t asked for it."

When Francoin’s frame arrived, it was also missing a rear threaded axle cup. Quite a rare replacement part to source. "I 3D-printed one myself and just used a steel nut."

There were specification surprises to the positive, too. "Bolts were initially specified in 7075 anodized alloy and the factory decided to do them in Titanium to suit my design. And the suspension fabrication was flawless. That’s always your big worry: that the rear tyre will hit the frame at full compression. And on my bike, the tolerances are perfect." That missing ‘e’ is not clever marketing but was an oversight by the factory. (Photo: point4five_ind)
Ride24

Inspiration for the name?

Francoin’s titanium dual-suspension project eventually developed a brand name of its own: Point4five. And if you are wondering about that etymology, it’s quite simple.

"The Colt 45 handgun. I’m not a shooter, but as an industrial designer, I appreciate the design merits of the Colt 45. Because my bike is made from an advanced metal, the name resonates, as the Colt 45 is also amazing precision design, in metal."

The clever naming convention doesn’t end at Point4five, which is the brand name. Francoin’s bike model is the Double Bacon. You know, because everything is better with double bacon. Designing a bike at home, and having it built afar, is a leap of faith. But Francoin’s was rewarded, with the Double Bacon being everything he hoped. (Photo: point4five_ind)
Ride24

Would he do another one?

Although edification was the aim of this personal titanium mountain bike project, Francoin wants to do low volume production, on order, and has some interest from abroad.

"Version two is always going to be better, right? I’ve though about rear tyre clearance and want to make it better to accommodate a 2.6” width tyre."

What else does Francoin envisage on the Double Bacon 2.0? "If there’s one thing you can’t model or understand, even with the best design software, it’s cable routing. Once a bike is built, you can experience the kinks and issues with cable routing. So I’d want to improve that. And  add some frame protection."

True to its purist design, the Point4five Double Bacon frame isn’t painted. "Titanium is its own best finish. It’s a gorgeous material that does not corrode, and shouldn’t be painted. And allowed to age and gain patina, with use."

We live in a world where facts and fiction get blurred
In times of uncertainty you need journalism you can trust. For 14 free days, you can have access to a world of in-depth analyses, investigative journalism, top opinions and a range of features. Journalism strengthens democracy. Invest in the future today. Thereafter you will be billed R75 per month. You can cancel anytime and if you cancel within 14 days you won't be billed.
Subscribe to News24
Next on Life
How triathlon can make you a better mountain biker