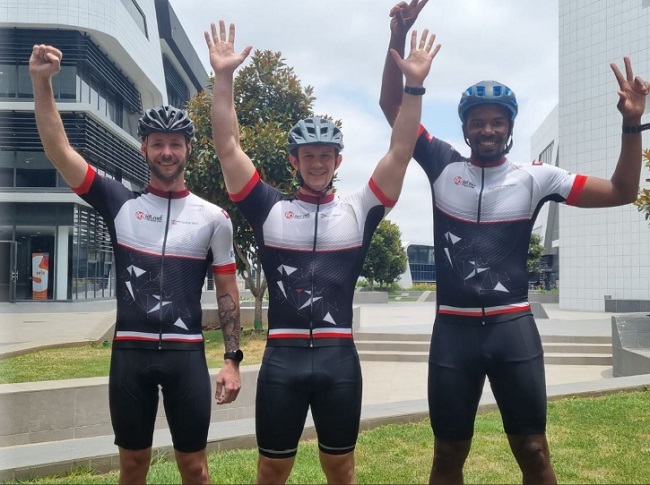 Work in tech. Will ride bikes. Three of the IoT.nxt employees, who will be riding the 947, with its new data management (Photo: IoT.nxt)

With most weekend warriors now having the ability to harvest data that was once the preserve of pro teams, data management has become a new challenge.

It might be great having power meter sensors on your cranks or chainring, that can track power output and any asymmetry in your pedal stroke, but how do you make sense of all that data? Or access and display it in a meaningful manner?

Tech company, IoT.nxt will use the 947 event to showcase its latest innovation in cycling data management. From rugby to riding tech

The Centurion tech specialist has already proven its ability in the sports data management realm. It worked with Vodafone to develop display platform for the British and Irish Lions, during their tour in South Africa, earlier this year.

At the 947, four of IoT.nxt’s employees will be using the company’s Commander platform, to manage their riding data.

Each rider will be wearing a smartwatch that will measure similar metrics to the tracker and include additional metrics like the rider’s heart rate and power.

The smartwatch syncs to Strava. IoT.nxt pulls all the data from Strava and the GPS tracker to Commander, a contextual platform that visualises the data.

"This use of IoT technology in sport was first introduced in July this year for the British and Irish Lions team with the Vodafone PLAYER Connect performance dashboard, which used IoT technology that revolutionised how player data is evaluated."

IoT.nxt solution is technology agnostic, making it possible to integrate any sports tracker or device and receive real-time data in a single dashboard. The technology has vast potential for cyclists, especially riders who receive coaching and performance data analysis from coaches in different geographies.

We live in a world where facts and fiction get blurred
In times of uncertainty you need journalism you can trust. For 14 free days, you can have access to a world of in-depth analyses, investigative journalism, top opinions and a range of features. Journalism strengthens democracy. Invest in the future today. Thereafter you will be billed R75 per month. You can cancel anytime and if you cancel within 14 days you won't be billed.
Subscribe to News24
Next on Life
Liv’s latest MTB will Intrigue women who ride the wildest trails

Read more on:
947centurioninternet of things