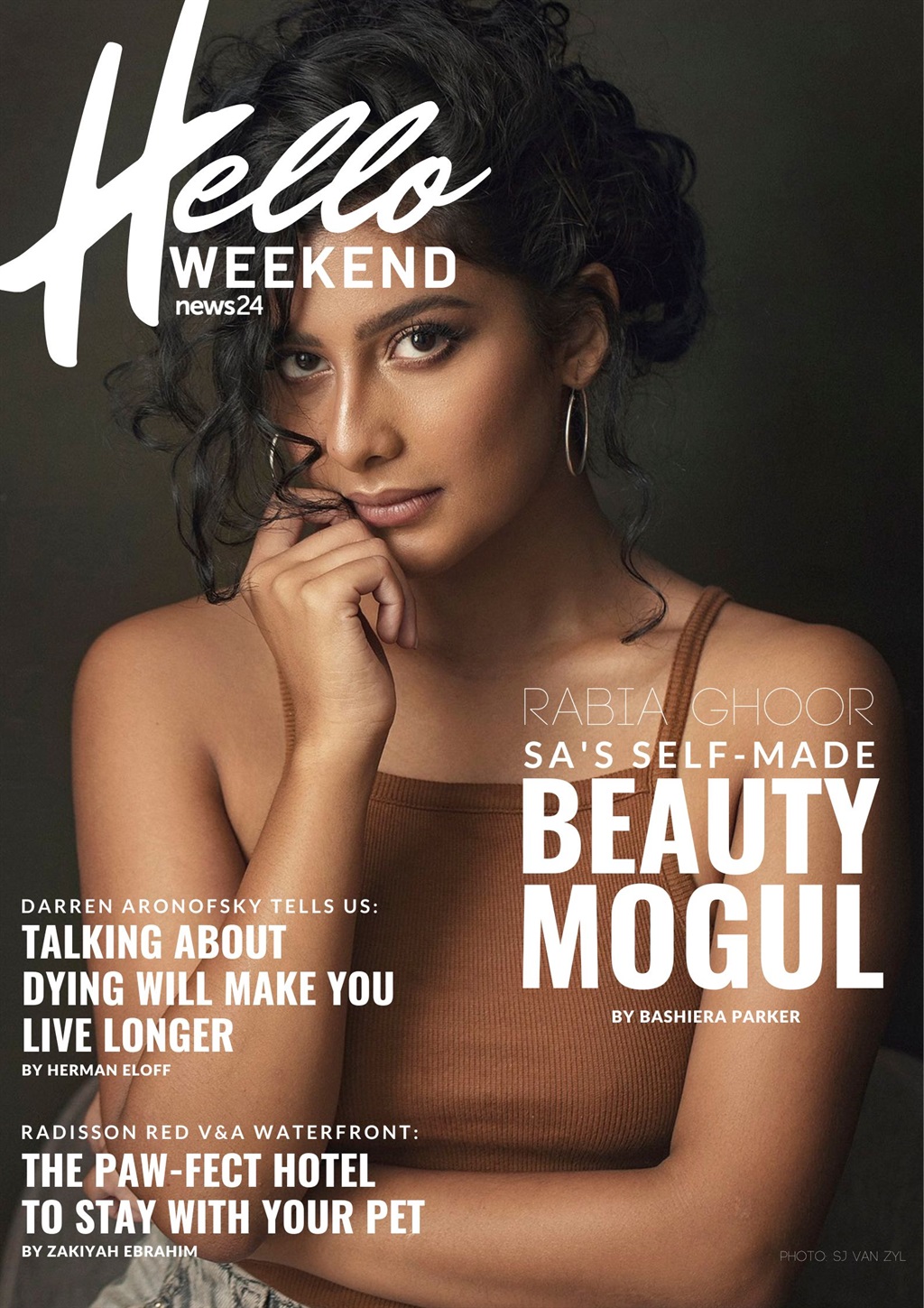 Rabia Ghoor has been doing some amazing things since she was only 14 years old. Now this self-made Gen Z beauty mogul is stepping it up another level thanks to her authentic approach to business and her in-depth understanding of what her customers really want. Bashiera Parker catches up with her. Also in this weekend's edition; Cinematic legend Darren Aronofsky talks to me about his new documentary series starring Chris Hemsworth and how he switches between cinematic and documentary filmmaking with unmatched success. Plus, motoring editor Janine van der Post also reveals the most beautiful car she's driven this year.

Rabia Ghoor is a self-made South African beauty mogul with a growing empire which she started as a teenager. "I started...from a four-square-metre area in my bedroom. I was fourteen years old at the time," the swiitchbeauty founder writes in a note on her website. It's written in a tone synonymous with the brand's pastel pink and white packaging. swiitch, spelled with a lower case s and two i's, is all about making "things that do what they say they're going to do [for] South African humans on the internet." Rabia - just like swiitchbeauty's packaging, branding and presence online - is vibrant and relatable and her products cater to a whole new generation of South African consumers. "I guess most makeup that's made isn't made by the user; that's what makes swiitch special," Rabia, who dropped out of school in Grade 10 to run her own company, says.

'Accepting your own death leads to longevity': Limitless director Darren Aronofsky tells us

"I guess I started to think about these themes when I made a film back in 2006, called The Fountain, which was about a man facing his own death and end of life. It was an early exploration of longevity science," American film director Darren Aronofsky tells a select group of international media during a virtual roundtable conversation about the new National Geographic series, Limitless. Starring Chris Hemsworth, the six-part documentary follows the Thor star as he explores ways to combat ageing and discovers the "full potential of the human body". Aronofsky, perhaps best known for his work on films such as Requiem for a Dream and Black Swan, says the themes explored in the fascinating Nat Geo series can be traced way back in his career, to a time when he was working on The Fountain, starring Hugh Jackman and Rachel Weisz. 'All our pets are VIPs': Fur babies now get their own menu at Radisson Red V&A Waterfront

There is 'room at the inn' for your fur babies when you next visit the Radisson RED V&A Waterfront Cape Town. And thanks to a newly launched partnership, there is something for them to nibble on too. The hotel is partnering with Pet Heaven to extend its existing pet-friendly offering to pet families. Says Radisson RED's curator, Leonie Andereya: "You don't have to feel the stress and guilt about leaving your pets at home. All our pets are VIPs when they stay with us, and we are excited that with this new partnership, we will now be able to offer some culinary highlights to our four-legged guests.

This is the most beautiful car driven in 2022

It's the end of the year, and while there are still several more cars to be launched before we say farewell to 2022, there's one car that has made such a visual impact. News24 Motoring editor Janine Van der Post says its the most beautiful car she's driven all year.

How do you define love? It's definitely not an easy thing to do, and Bongani Baloyi and Dennis Ngango crack up as I ask them to give it a go. "You can't define love if we are still defining love," says Bongani, one-third of the team behind the popular YouTube channel, Defining. "Cause it's a journey that we walk through. If we defined love, that means the series Defining Love is ending," he adds, referring to the online show that has helped skyrocket their channel into the limelight. Dennis, Noma and Bongani make up the Defining team.
Photo: Supplied
YOU MIGHT HAVE MISSED THESE STORIES THIS WEEK:

The golden question: Is urine therapy an effective beauty hack for smooth skin?

An adult produces around 1.5 litres of urine a day, but not all urine ends up in the toilet - some people collect and drink it, rub it against their skin, use it as eye drops, or inject it into their muscles: enter urine therapy. It's an ancient tradition that was believed to treat everything from acne to cancer. But this therapy - also known as urophagia or urotherapy - only gained popularity in the west (as a natural alternative to modern medicine) in the late 90s.

Trevor Noah may be a global star, but he is keen to work with South Africans in everything he does. The comedian released his latest comedy special, Trevor Noah: I Wish You Would, on Netflix on Tuesday, and it turns out the music for the special was recorded and curated by South Africans. "I got a call from David Paul Meyer saying, 'Trevor's asked for you by name'," music director George Avakian tells News24. It comes as no surprise as Avakian has done this before. She Said (4/5 Stars): The true story about the work done by journalists Jodi Kantor and Megan Twohey to break the story about Harvey Weinstein's sexual misconduct allegations.

All The Broken Places by John Boyne: From the New York Times bestselling author John Boyne, a devastating, beautiful story about a woman who must confront the sins of her own terrible past, and a present in which it is never too late for bravery.

Orange pudding with caramel oranges: Don’t expect too many leftovers when you make this scrumptious pudding. This is an economical recipe because you can make three of these delicious puddings from just one pack of Ina Paarman’s Vanilla Cake Mix. It’s delicious served with caramelised orange segments. We live in a world where facts and fiction get blurred
In times of uncertainty you need journalism you can trust. For 14 free days, you can have access to a world of in-depth analyses, investigative journalism, top opinions and a range of features. Journalism strengthens democracy. Invest in the future today. Thereafter you will be billed R75 per month. You can cancel anytime and if you cancel within 14 days you won't be billed.
Subscribe to News24
Next on Life
HELLO WEEKEND | Cinema, sex, controversy, and a new Porsche