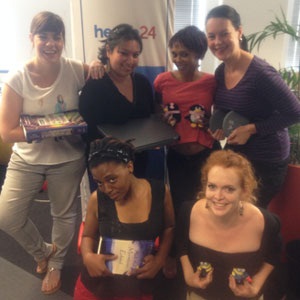 The Health24 team mamming together.
What is #mamming? According to the two women who created the concept it’s quite simple really: “#Mamming is the act of laying your (clothed) boobs on a flat surface. Like a counter. Or a bench. Or the body of a person who is #planking."

And why would you want to do this, you ask? Apart from the fun factor, it’s all about raising awareness about breast cancer and the importance of mammograms.

Michelle Lamont and Michele Jaret are the two women behind this concept which has taken social media by storm and has women the world over resting their breasts on surfaces and posting their pictures online with #mamming.

Michelle says the idea came out of a group brainstorm. “We were trying to come up with something to do for breast cancer awareness month and asked some people to ‘mam’ around the office and took some pictures to make sure it would be funny. The results were hilariously awkward, and we knew we were onto something.”

Michelle is only too aware of the discomfort of a mammogram after being diagnosed with breast cancer herself at the age of 25.

“I was diagnosed and had a double mastectomy and six months of chemotherapy. [During that time] I had to get a mammogram - and it was so incredibly awkward. The only thing that got me through was thinking about how many other women had to do it before me. We hope mamming gives that solace to other women, too. It's meant to show solidarity with everyone who needs to undergo this screening procedure, because no matter how awkward it is, it could save your life.”

If you want to ‘mam’ right, lay your clothed boobs on a flat surface, the same way you'd rest them in a mammogram machine – then smile and take a pic. Simple. Even men can do it.

“When you're talking about a disease that affects one in eight women - and is increasingly being diagnosed in younger and younger women - it's hard to find someone who hasn't been touched by it.

“I was lucky to catch my cancer at an early stage, largely because I was willing to talk to my doctor about my boobs, even though I felt extremely awkward about it. That's why it's so incredibly important that we get a conversation started about prevention. We hope women will feel less awkward dealing with these issues with their doctors, so they won't put off life-saving screening,” says Michelle.

Perhaps the fact that breast cancer is so prevalent and touched so many people is why this campaign has taken off so well, and while Michele and Michelle admit that it’s ‘not going to cure cancer’, it is reaching women all across the world and spreading the message of the importance of early detection through social media.
“Right now the best tool we have to beat this disease is early detection - like mammograms. Anything we can do that makes women feel more comfortable about getting screened is a good thing,” says Michelle.

Follow Michelle’s blog, Killer Boobies, in which she has documented her cancer  experience.

“Humor has been my main tool for dealing with my disease, and that shines through in the campaign as well as in the blog. A lot of other survivors have reached out to me through it, and I'm really glad that sharing my experience has touched other people.”

If you're still not sure how to 'mam' properly, watch this hilarious video.

GALLERY: Health24 strutted their stuff. Check out their #mamming gallery.

We live in a world where facts and fiction get blurred
In times of uncertainty you need journalism you can trust. For 14 free days, you can have access to a world of in-depth analyses, investigative journalism, top opinions and a range of features. Journalism strengthens democracy. Invest in the future today. Thereafter you will be billed R75 per month. You can cancel anytime and if you cancel within 14 days you won't be billed.
Subscribe to News24
Related Links
All about #mamming
How to do a breast self exam
Check your breasts
Next on Life
Exactly what to do if you notice a lump in your breast